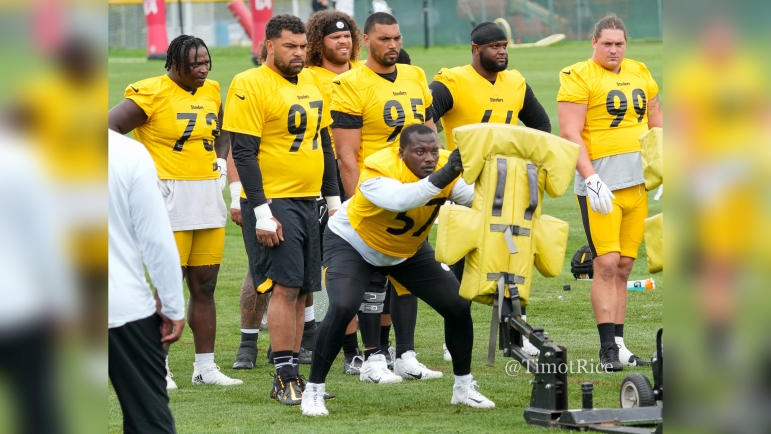 At the conclusion of practice, Missi Matthews and Max Starks appeared on Steelers.com’s UPMC Training Camp Wrap Up to talk about several topics, including the battle at left guard between Kevin Dotson and Kendrick Green as well as the current state of the Steelers’ DL room.

When Matthews asked Starks, former left tackle for the Pittsburgh Steelers, about his thoughts on the DL room as it stands today, Starks wasn’t shy in complementing the room and the talent it has compared to the last time Pittsburgh took the field in 2021.

“This unit right now looks to be one of the deepest on this team,” Starks said on Steelers Live. “We have a lot of deep units, but the defensive linemen. When you think about last year and the issues we went through, we were searching and scouring practice squads to find some guys who could fill in with the absence of Stephon Tuitt and the injury to Tyson Alualu.”

For a unit to go from adding Montravius Adams from the New Orleans Saints’ practice squad last season to try and stop the nosebleed that was the Steelers’ run defense to being considered possibly the deepest unit on the entire team is a lot of praise from Starks when addressing the defensive line. Still, when you look at the unit on paper, you see a mixture of experience and youth, having both that proven production as well as the potential for younger guys to develop into key contributors this season.

Cam Heyward is the alpha dog in the room and a healthy Alualu adds a proficient run stopper upfront. Chris Wormley and Larry Ogunjobi are both coming off career years in 2021, while Montravius Adams experienced a career resurgence himself with Pittsburgh last season. Isaiahh Loudermilk showed more than what was expected as a rookie and has developed nicely over the offseason. Rookie DeMarvin Leal has flashed at times in camp, showing pass rush upside while still learning the intricacies of the position. Throw in the Davis twins and Henry Mondeaux and you have a room with ten-plus guys that could all be on NFL rosters, as Starks alluded to in his final comments on the DL.

“It seems like this group has about ten guys that you are going to have to try to pare down to what your game day list is going to be. And I think that’s one of the things I look at and say, ‘This is a good problem to have’,” Starks said.

There is no doubt that Pittsburgh’s DL is deeper and more talented than the unit that took the field last season. Now it comes down to if this unit can help the Steelers return to being that feared top-five defense in the league that they have been so often in their storied history.