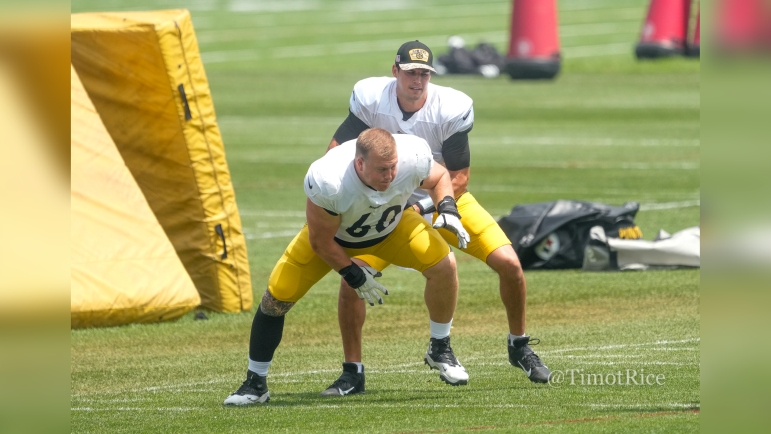 As the team prepared to take the practice field Tuesday, QB Mason Rudolph took some time to speak with the media regarding the QB competition as well as other topics. When asked about the distribution of reps during practice, Rudolph suggested that all three QBs in competition with each other would be mixing and matching with the starters and backups to spread the reps around as well as develop chemistry will all their teammates on offense.

Mason Rudolph said the QB1/QB2/QB3 reps are preordained and he’s nonplussed about where he is on the depth chart on a particular day pic.twitter.com/2ZuylEgOvg

“We’re going to mix a bit this week,” Rudolph said regarding the QB reps in training camp practices on video via Chris Adamski of the Pittsburgh Tribune-Review. “We got some young offensive linemen I think it’s a good opportunity for me to lead them and encourage them with just trying to mesh as a unit because preseason is coming quick, and they are all going to be in there and playing with one of us three, so it’s important to build chemistry with a different group of guys.”

As expected, Rudolph confirmed Mike Tomlin’s previous comments that Mitch Trubisky, Mason Rudolph, and Kenny Pickett are running in all groups during training camp practice, calling it part of “team development”. Rudolph then expanded on Tomlin’s comments, calling the opportunity to run with the second and third team offensive units as a chance to mentor them and help them mesh together.

This specifically pertains to the offensive line as a large portion of the guys on the roster have never played next to each other, making it imperative for them to feel comfortable prior to preseason action getting underway.

Mason Rudolph is the longest-tenured QB on the depth chart in Pittsburgh and has logged a fair number of snaps in the preseason along with starting ten games in the regular season. That may not seem like a lot of playing experience when compared to Ben Roethlisberger, but with Trubisky and Pickett entering their first season with the team, Rudolph is the guy that has the most experience in this offensive system.

Hence, if he can provide any insight to younger skill players or offensive linemen in the backup groups, it will only be seen as a positive as Pittsburgh prepares to kick off the preseason against the Seattle Seahawks on August 13.