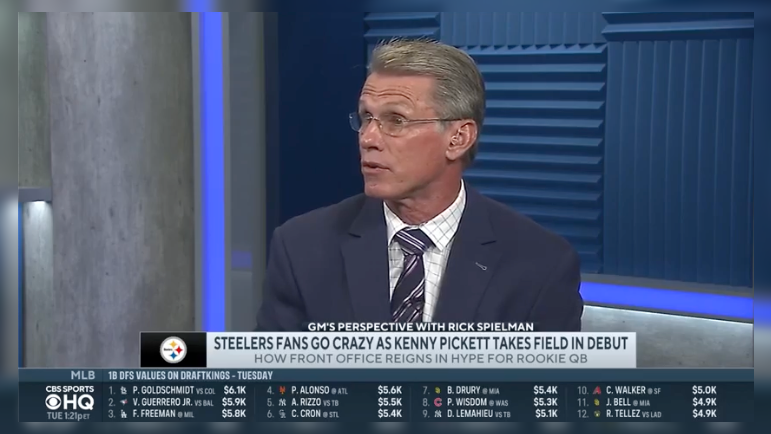 If you watched the Pittsburgh Steelers’ preseason opener at Acrisure Stadium against the Seattle Seahawks Saturday night, you were treated to quite a debut from rookie quarterback Kenny Pickett in the black and gold.

Pickett, the No. 20 overall pick in the 2022 NFL Draft out of Pittsburgh, ran onto the field under a wave of “Kenny! Kenny! Kenny!” chants and then put on quite the show, finishing 13-for-15 for 95 yards and two touchdowns, including the game-winner to Tyler Vaughns with three seconds left against Seattle.

Pickett’s performance exceeded some expectations overall and kept him on the same level as veterans Mitch Trubisky and Mason Rudolph in the perceived three-man QB competition. Still, it’s important to note it was just preseason, and that tamping down the hype could be good for the rookie, which is something that the Steelers’ coaching staff and front office is likely trying to do, according to former NFL GM Rick Spielman, who appeared on CBS Sports HQ Tuesday.

Spielman, in fact, was one of the 16 candidates for the Steelers’ open GM job following the retirement of Kevin Colbert. The Steelers obviously didn’t go with him as the choice for the next GM, but he had an interesting take on Pickett’s performance, stating that it’s now up to the coaches and front office personnel to keep the hype in check and continue to make sure Pickett improves and doesn’t get too far ahead of himself, even if the long-time NFL executive believes it was a simple scheme for Pickett in his debut.

“…The thing that was encouraging was that when the bright lights came on — and that’s his home stadium, that’s where he played all his college games — he seemed to rise to that occasion, so that was a great sign,” Spielman said regarding Pickett’s performance, according to video via CBS Sports’ official YouTube page. “And then at the end of the game, for him to take them down for a game-winning drive to beat the Seattle Seahawks that night was great.

“So there’s a lot of things from a front office standpoint, from a head coaching standpoint to the coaching staff standpoint, to say ‘Let’s slow it down here a little bit,'” Spielman added. “That was against Seattle’s twos and threes. And a lot of those guys probably aren’t gonna be on a team three weeks from now, but it shows that there’s a bright future ahead of him. And it’ll be interesting to see how much he can progress through the rest of this pre-season.”

Pickett isn’t the type of player to get caught up in his performance from one game, or rest on what he did on the field that night in hopes that it will carry him moving forward. In fact, he probably quickly forgot about what he was able to accomplish and has turned the page entirely, focusing on improving each and every day in preseason, like Spielman is looking for.

Still, it’s interesting to hear a former front office executive talk about the need for the front office and the coaching staff to try and slow down a bit of the hype that is very clearly surrounding the young, talented signal caller, who is becoming sort of a hometown hero in the Steel City.

Chances are, the players already policed that internally and there’s nothing to be said from the coaching staff, let alone anyone in the front office. It’s a strange take overall from Spielman, but again that could be in large part why he’s out of the league, considering how out of touch he sounds, especially when talking about a player like Pickett, who is level-headed, even-keeled, and just wants to improve each and every day, rather than focusing on what he did in the past.