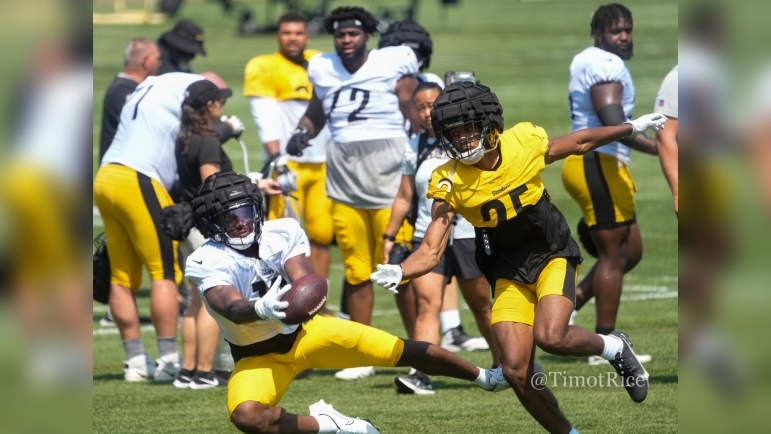 My latest updated Pittsburgh Steelers’ roster predictions, mapping out the 53-man roster and 16-man practice squad. A couple of changes from my last edition. I’ll have just one more prediction after this, a final guess of the team’s initial roster as they get set for Week One against the Cincinnati Bengals.

Analysis: Belief is Mason Rudolph will remain a Steeler come Week One. Doubt Pittsburgh will shop him but they’ll likely listen to calls. If he stays, he’ll be the #3 and gameday inactive. But the scars from 2019 is more likely to make the team want to keep as many competent quarterbacks as they can.

Analysis: Exit Anthony McFarland, enter Jaylen Warren. McFarland disappeared from the offense over the final week of camp and ran behind Warren in the preseason win over Jacksonville. Warren didn’t put the ball on the ground and offers more on special teams. His fiery, competitive attitude is infectious.

Analysis: Watt has been out for quite some time due to a shoulder injury. But he should be healthy for Week One and could suit up for this Sunday’s finale against Detroit.

Analysis: The same three I’ve had since my pre-camp predictions. Heyward came on strong over the final week of camp. A much different body type but he could be a fun piece in Matt Canada’s offense.

Analysis: Anthony Miller’s shoulder injury makes this group easier to predict. Boykin has good special teams value and could be a starting gunner opposite James Pierre Week One. Austin has battled a foot injury and may start the year as an inactive until he gets back up to speed.

Analysis: Surprised? I am too. Trent Scott a new addition I didn’t expect to have on here. But watching his play and the offensive line struggle with Pat Meyer’s new technique, I can see Scott making this team. He’s been coached by Meyer his whole NFL career and understands the technique and coaching points Meyer wants. His overall talent isn’t worthy of the 53 but there may be more trust in Scott to make it and he’s gotten a fair amount of opportunity this summer. Is Joe Haeg’s job 100% safe? Going into camp, I would’ve said yes. No, especially with him in concussion protocol, I’m not so sure. But for now, I’ll keep him and make Scott the 9th offensive lineman.

Analysis: No changes here though I firmly believe this team will look to add more offensive line help after the cutdowns to 53. Waiver claims, maybe a trade prior to cutdowns. They’re not happy with their room, nor should they be, and they’ve literally revamped their entire third-string line. They’ll work on changing the backups by summer’s end.

Analysis: Cole and Hassenuaer are safe to make the roster. Cole and Okorafor have been the Steelers’ two best linemen while Hassenauer is the top backup at center.

Analysis: Loudermilk has battled a rib injury and only played five snaps against Jacksonville. I’ll keep an eye on him in the finale. Everyone else here is safe though I wonder if Pittsburgh would consider trading some of their d-line depth, like Chris Wormley, if they could add o-line help. It’s an “out there” thought and player-for-player deals are rare but it’s worth mentioning out loud.

Analysis: Montravius Adams has missed about two weeks with an ankle injury. It doesn’t seem to be serious enough for him to start the year on IR but even if he does, he’ll have to initially make the 53-man roster in order to be eligible to return.

Analysis: I wrote up my predictions prior to yesterday’s cutdowns, believing and writing Avery cemented the #3 EDGE spot. Wrong. I’m not sure of the reason and perhaps they look for outside help. Maybe Quincy Roche circles back. For now, I’ll bump Tuszka up and put Rashed Jr. as the #4, who did impress late in camp and during Saturday’s contest.

Analysis: Sticking with the same group as last time. Robinson has a great chance to make the roster and brings the energy, intensity, and hit power while being disciplined. It’s an attractive foundation to build off of. Allen battled a hamstring injury for most of camp but he should be healthy enough to play in the finale. Tre Norwood hasn’t done a great job as the upback on the punt team, increasing Allen’s value. Buddy Johnson is a good tackler but that’s about it. I’m not seeing him as a threat to make it.

Analysis: This group remains unchanged. Maulet missed last week with a hamstring injury but hopefully he’s not an IR candidate. They like him as an early-down slot corner. Pierre should be adequate depth. Justin Layne’s fallen out of favor for weeks now.

Analysis: One change here, subtracting Miles Killebrew from the roster. He’s battled a pec injury and has barely been able to practice in full the entire summer. Not sure what’s going on with him. Kazee has impressed and should be the #3 safety in big base/big nickel packages. Killebrew still holds special teams value but I’ll make him my surprise cut to keep a ninth offensive lineman.

Analysis: Boswell is as safe as safe can be.

Analysis: Harvin now enters “safe” territory. He’s punted well this summer and will be the guy Week One.

Analysis: Kuntz will be the team’s snapper this season. Derrek Tuszka should be the backup long snapper. Gunner Olszewski, Cam Sutton, and Mitch Trubisky are backup holder options.

Analysis: Actually had trouble getting to 16 names, especially on the defensive side of the football. Team is likely to add outside help there. Borghi is more of a placeholder without a lot of other in-house options. Sims has kick and punt return value, Vaughns has enjoyed a nice summer, and White is known and versatile. Keeping three offensive linemen to have as much competition as possible. Again, team could look outside for additional help.

Mondeaux has quietly had a solid summer and makes it over Khalil Davis. Carter flashed early in camp while Scott has been consistent start to finish. I’ll put Johnson on the practice squad but I could see him cut outright, too. Ditto with Steele. Platel has inside/outside versatility while Stiner has size and is a good tackler, Killebrew-lite with him being off the roster in this scenario.