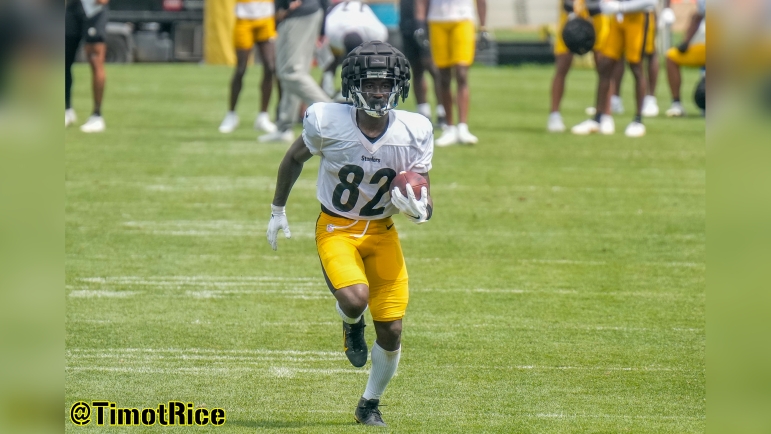 My last best guess – and this is increasingly becoming a guess – on who the Pittsburgh Steelers will keep on its 53 man roster after Tuesday’s 4 PM cutdowns. It’s important to recognize this is the initial roster and it’s very much subject to change, especially given all the injuries the team is working through.

So I’m going to shoot for the stars and try to reach the moon with my prediction. Going chalk is bound to be wrong, last year was a good example of that. Initially in 2021, they kept only eight offensive linemen, eight defensive backs, and eight defensive linemen. Things got a little more conventional later on.

My guesses as to the very wonky-looking initial roster that’ll crystalize in the coming days.

Here’s a look back at my roster predictions throughout this process.

Analysis: We’ll start with the status quo. Will the Steelers listen to offers for Mason Rudolph? I think so. Will any of them be good enough? That’s the key question. Push comes to shove, I think they hold onto Rudolph. Don’t think a hypothetical sixth round pick is going to get it done.

Analysis: No changes here, too. Warren has taken care of the ball enough to make the initial roster. He’s the better runner than Snell but the two could split time behind Harris to begin the year. I like the way Warren’s competed all summer and he’s carved out some value on special teams. He and Snell could open the season as the starting wings on the punt coverage team.

Analysis: I gave all kinda of consideration to Watt here. A potential cut who circles back to the team? Possibly. Could he go onto IR? Less likely but I can’t rule it out and even if that were the case, he’d still have to make the initial 53. Ultimately, I’m keeping him here but it was a mild surprise to see him miss yesterday’s finale. He’s been out quite a bit of time. Another two weeks should get him back to 100%. Right?

Analysis: No alterations here either. These three feel as cemented as any positional group. Heyward’s had a nice summer and the Steelers shouldn’t risk exposing him to waivers. Playing time will be inconsistent but he’s athletic and can make impact plays in the pass game along with being a solid special teamer.

Analysis: Ok, here’s where it gets different. You’ve heard of the team keeping six wide receivers. Let’s turn the dial to 11 and keep seven. As you’ll read below, I’ll guess Calvin Austin is transferred to IR, which will put the team back down to six for Week One. Though more of an outside receiver, Sims can replicate some of what Austin does in the receiver perimeter run game and he’s had a solid summer, especially over the final three weeks. Boykin has also done well and has more special teams value in the coverage game than Sims. But you want to keep your best players on the roster and these seven are worthy, again with the caveat of Austin’s injury.

Analysis: Haeg’s had a funny summer, losing some time to Pat Meyer-favorite Trent Scott while recently going through concussion protocol. I could see either tackle make it but have Scott being cut because he’s cheaper and there’s a higher chance he would return than Haeg. But certainly, the team will explore outside help across this whole line.

Analysis: Lighter on the offensive line as the team knows it needs to add more help. The group they had didn’t get the job done. At this point, you can make a strong case for Green being released and I actively considered the idea. I’m not sure what you’d get out of him as a backup at this point. But his third round status and lack of better options from a year ago keeps him around. For now, anyway, until the team potentially finds a better option after cutdowns.

Analysis: No changes here. Hassenauer isn’t an ideal backup center but he’s the best they’ve got. And not much about this group is ideal. Right now, they’re just striving for average. Heck, mediocre.

Analysis: Some injuries to note along the defensive line with Loudermilk at end and Montravius Adams at nose tackle. But none seem so bad that they’d be season-ending stuff and again, even if anyone goes to IR, they’d need to make the 53 in order to be eligible to return. Leal’s had a nice summer while Ogunjobi will have a large role in this defense, especially in sub-packages. He’s gotten more work in the team’s base defense lately, too.

Analysis: Adams has missed several weeks with an unknown ankle injury but hopefully he’s ready to work two weeks from now. Alualu is at least healthy and should hold down the middle.

Analysis: Hamilcar Rashed Jr. was arguably the most “bubble” player entering this game, trying to carve out a home as the last OLB on the roster. What did he do yesterday? A big goose egg on the stat sheet. The only time he was noticed was thanks to a 4th down facemask that kept the Lions’ drive going, ending in a touchdown. That’s not going to get you a seat on the roster. Pittsburgh will have to look for more OLB help after cutdowns to round out the room.

Analysis: Just four being kept here in the initial-roster weirdness. No Marcus Allen, who has a pretty large base salary and could return at a cheaper rate in a shrewd cost-cutting move. He would be subject to waivers but I don’t think anyone is picking up his $2.54 million base salary for a 26 year old backup linebacker whose been hurt the entire summer. Robinson has earned his place on the team. Pittsburgh pulls the rip cord on second-year Buddy Johnson.

Analysis: Same group of five here. Maulet is dealing with a hamstring injury but can hopefully get back for Week One and if he has to miss the opener, so be it. Probably not bad enough to put him on IR but we’ll wait and see. Pierre could be a starting gunner opposite Boykin and rounds out the outside CB depth. Sutton will be the RCB in base and work in the slot in dime packages and obvious passing situations.

Analysis: Very heavy here. Kazee is going to IR. It’s just a question of if he’ll be part of the initial 53 or if he’ll go straight to IR without the chance to return. His wrist injury seems serious but I think they’ll keep the door open for a mid-season return. So he makes the initial group.

Killebrew is a real enigma. Injured pec day one of camp, has been in and out of practice, never played in a game. What happens with him? Riley just hopped on the moving train but looked good in the finale and can play slot or safety. He also has some NFL experience, starting seven games last year, which accelerates his learning curve with his new team.

Analysis: Boswell is one source of clarity on this jumbled up roster.

Analysis: Harvin had a good summer and should be this team’s starter Week One.

Analysis: Kuntz had one high snap yesterday but he’ll be the guy Week One.

The IR and re-signing moves I think would happen in my scenario.

Austin and Kazee going to IR, missing at least the first four weeks of the season. Austin probably could return by then, Kazee will be out longer. Allen and Scott circle back the way Maulet/Coward/Finney did a year ago. Other changes of outside additions are possible, if not likely. That’s where a Kendrick Green could get waived. This team would also need to add a 4th outside linebacker.

If Austin doesn’t go to IR, remove Sims from my roster.

Analysis: I can’t even get this group to 16 right now. So this is where I’m at with these 11. The rest will be filled-in by players outside the organization but there could be other changes here, especially along the offensive line and secondary. Don’t even have Carlins Platel here since he may land on IR after getting hurt at the end of yesterday’s game. Bummer.