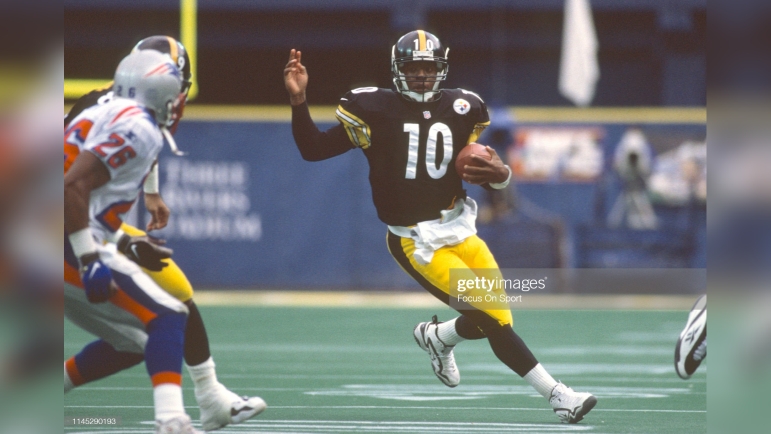 I’ve said it before and I’ll say it again: Kordell Stewart was so far ahead of his time in the NFL. If he were in today’s game, he’d be an absolute superstar due to his skillset.

Some people don’t want to hear it, and certainly don’t want to believe it, but it’s much closer to a cold, hard truth than anyone wants to admit.

He was so far ahead of his time. I'd kill to have him in the black and gold in today's era. https://t.co/9GBUmyTe05

Back in the 90s and early 2000s though, he wasn’t allowed to really be who he truly was under center, which was a dynamic running quarterback who made plays with his legs, could throw on the run, and really brought something to the table that no defense really had a clue to stop. But the Steelers, especially head coach Bill Cowher, didn’t quite want that based on the way the team was built around a powerful rushing attack with Jerome Bettis and an elite-level defense.

The Steelers didn’t want that dynamic quarterback who could swing games one way or another with a spectacular play or an epic mistake. Add in the fact that Stewart went through multiple coordinators after Chan Gailey left, and it’s easy to see why Stewart flamed out in the early 2000s.

Still, he would have been a star today. Many know it, including Stewart. So, hearing Stewart back on the radio in Pittsburgh on 93.7 The Fan Thursday with The PM Show hosted by Andrew Fillipponi and Chris Mueller brought back some great memories from that late 90s era in which the Steelers went to two AFC Championship Games, won a ton of games and really looked like they were bringing about great change to the game.

In the end though, Stewart and the Steelers couldn’t get it done when it counted, which seems to have clouded some people’s perception of the former electrifying member of the black and gold. That said, those times were certainly exciting for all involved, including Stewart, who told Fillipponi and Mueller Wednesday that he wishes he could not only relive those glory days, but the “Slash” era as well, in which he moonlighted as a wide receiver to help the Steelers out in a pinch.

That era, while electrifying, still causes great debate today when it comes to Stewart and his standing within the history of the Steelers’ organization.

Starting a new series today for @Steelersdepot as we head further into the offseason. Building an all-time Steelers' team using non-Hall of Famers. Today, I start with QB. A personal favorite for me. #HereWeGo #Steelershttps://t.co/nnDHraMSIW

“The only difference is we didn’t win the Super Bowl. If we go to the Super Bowl and we win one, this ain’t even a debate nor conversation piece,” Stewart said to Fillipponi and Mueller, according to audio via 93.7 The Fan. “I’m trying to figure out how to typecast or place what we did back then, because what we did back then was special. You cannot erase it. It is documented. There was some tough times, there were some horrible times, but boy, I tell you what, when the times were good, the times were excellent and all it is is the experience and the game we play and all you can do is deal with the hand that’s dealt to you.

I was 5 when Kordell Stewart lit up Denver at home in early Dec. 1997. This was fun to dive into and watch for @Steelersdepot. https://t.co/W1boKFQv82

That “Slash” era was special. After losing out to Jim Miller for the starting job in 1996 under center, Stewart adjusted nicely to his hybrid role, eventually rushing for 171 yards and five touchdowns in 1996, including a then-NFL record 80-yard touchdown on the ground. He also added 17 receptions for 293 yards and three touchdowns through the air.

From 1997 through 2001, Stewart started under center full time and put up some impressive stats, going to the Pro Bowl in 2001 while finishing fourth in NFL MVP votes that season as the Steelers went 13-3 before losing in the AFC Championship Game at then-Heinz Field due to a special teams implosion.

Many people have mixed feelings on Stewart, but he was a special talent that came about in the wrong era. Today, he’d be an absolute superstar in the NFL, one that many would be clamoring to get their hands on at the most important position in all of sports.