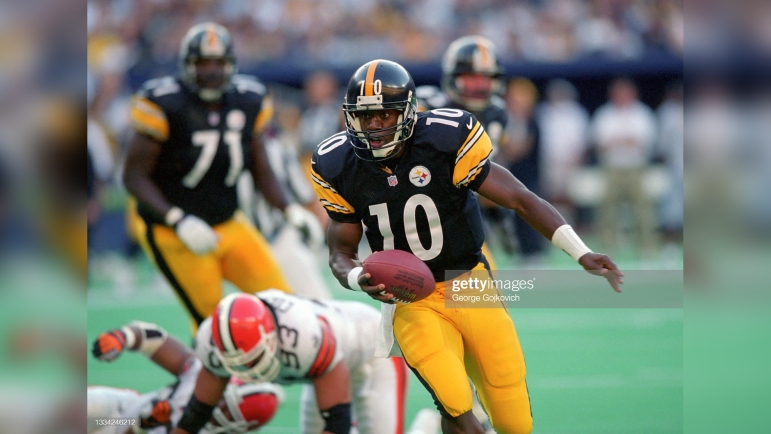 Most major developments have precursors that are often only recognized in hindsight, at least to their full extent. The ‘running quarterback’ has been a part of the game of football for a very long time in the era of the forward pass, and you could dig up the old names if you want.

But the reality is that we are only now in the era of the game in which it’s truly accepted as a valid aspiration rather than a handicap. Mobility is, of course, a benefit, but until recent years, for virtually everybody who played the position, the focus was always to put the ball in the air. Players like Lamar Jackson and Kyler Murray have changed that—and make guys like Kordell Stewart wish we’d seen it earlier.

“The game now today is what we were doing back in the 90s. It’s just the facts”, he told The PM Team on 93.7 The Fan yesterday. “The only difference with how they’re doing it now is. we truly were in the pocket. We truly were play-action passing, and the plays that I would make with my feet wasn’t ad-libbing laterally to make plays downfield. It was to get downfield to get out the way of all the extra heavy stuff around me, which is defensive players”.

A second-round draft pick out of Colorado in 1995, Stewart did not have a clearly-defined position for his first couple of years in the league, in part because it was initially difficult to envision him as a full-time quarterback. They also had Neil O’Donnell at the time. So he did a bit of everything, playing wide receiver, carrying the ball—but not much throwing, not until 1997.

He was quick to point out that he took the Steelers to two conference finals as a quarterback. And he believes that he could do even more if he were placed on one of today’s offenses that really lean into his skillset.

“If you could take what I’d done in that era and you place it in this era, it would work 100 ways over, and the money would show it, too, and the draft”, he said, referring to players like Murray being selected at the top of the draft. ”That’s what the game is about, right? Evolution”.

Now, would Stewart today be as good as the likes of Jackson and Murray—though we shouldn’t be putting Murray and Jackson in the same class, either? That’s a difficult question to answer, if not impossible, but I’m sure he could have played in an offense built more for his skills.

Meanwhile, today, we are still waiting for the postseason success of this generation of running quarterbacks. Jackson does have one win, but his Ravens have yet to see the conference finals. Winning trophies is the best way to get people to copy your script, so if those who advocate for the running quarterback really want to see it fully integrated into the game, they’re going to have to wait to see one of them hoist the Lombardi.