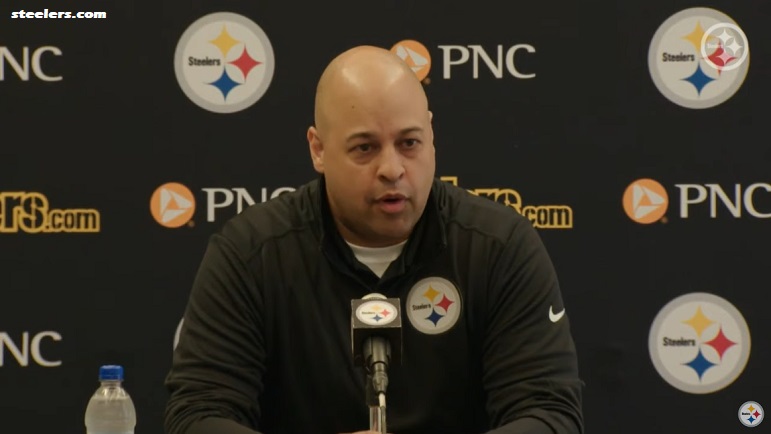 Much has been made this offseason in regards to the massive workload that Pro Bowl running back Najee Harris carried last season as a rookie, logging 381 touches to lead the entire league. The position was ignored during this past draft, although the team did pick up two undrafted backs in Jaylen Warren, the cousin of former Steeler “Fast” Willie Parker, and Mataeo Durant. Then, just last week, the team acquired Jeremy McNichols, who filled in for an injured Derrick Henry last season in Tennessee.

Although it doesn’t appear overly serious, Harris did in fact go down in yesterday’s practice at training camp, after apparently getting his foot stepped on. Earlier this morning, new General Manager Omar Khan was asked at several points during the press conference about his stud running back and the front office’s wishes to not only keep him fresh as the season progresses but also prolong his career. He was quick to note that injuries are a part of the game but also said he doesn’t anticipate it being an issue.

It again brings up the reality of what would the offense look like without Harris, who’s slated to be the focal point of the entire offense? Behind him on the depth chart isn’t anything near the talent level of him. As we’ve seen, foot injuries can definitely become an issue, and for further proof, look no further than Henry, who I mentioned above. Last season, he missed basically half the year with a Jones fracture in his right foot.

“We like the group that we have,” Khan said earlier on the Steelers YouTube Channel. “We have a couple guys banged up so we have to be ready to add to that room, but we feel good about that room.”

The running back room potentially might still be gaining reinforcements, as the team worked out former Pro Bowler Jordan Howard and Josh Adams just a few days ago. Howard, listed at 6’0″ and 222 lbs., seems to fit the identity of what the team is looking to do from an offensive standpoint, and still at just 27 years old, has several 1,000-yard campaigns to his name.

In my opinion, adding a back like Howard would provide great insurance for Harris, as he has all the workhorse-type qualities that you look for, and also is a great red zone/short yardage-type back. Keeping Harris fresh for a potential playoff run after the leaves fall should be a high priority of the coaching staff, as they look to alleviate pressure off the new quarterback, be it Mitch Trubisky or rookie Kenny Pickett.

“Coach will manage Najee with respect to the carries and all that, but yeah, we’re always going to be ready to have the next guy up, if needed, based on injuries or whatever the situation might be.”