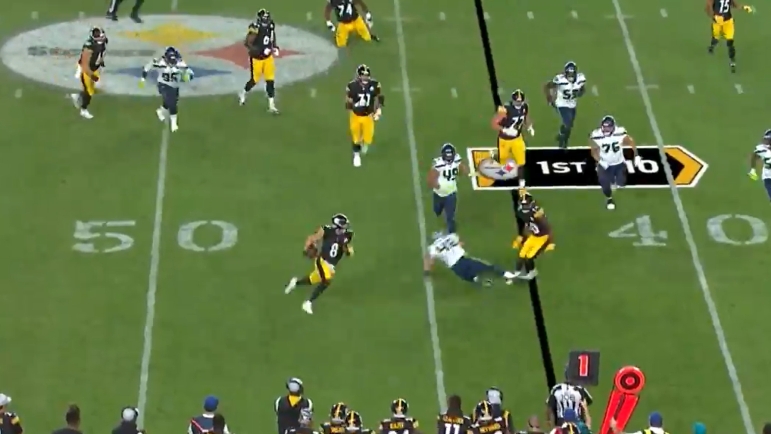 Kenny Pickett’s game-winning drive, as well as his opening-drive touchdown, will be what is remembered from his NFL debut with the Pittsburgh Steelers on Saturday night inside of Acrisure Stadium. It certainly was an electric atmosphere, even for a regular season game, despite still being in August.

But perhaps of equal significance to the big scoring plays were the footnotes in between, the plays that Pickett made, or put himself in a position to make, by using his athletic ability to move around the field, whether he was scrambling to escape pressure and make a throw or to convert a third down with his legs. It’s something the Steelers want to see more of from the position this year, including from Mitch Trubisky and Mason Rudolph.

“We’re all really good athletes in the quarterback room. I think not using your legs, you’re kind of holding yourself back and not taking advantage of one of the tools you have in your game”, Pickett said following the game when he was asked about using his legs to make plays, via the team’s website.

“In those situations where I felt like things were breaking down, or if I could just knife it for four yards and get a first down, I was gonna do that. It really helped us out, moving the chains, and it’s something I’m definitely gonna do as my career progresses”.

The rookie finished the game going 13-for-15 putting the ball in the air for 95 yards and two touchdown passes, but he also recorded three scrambles for 16 yards, and the statistics don’t show the times that he put himself in position to make throws by moving the pocket and getting out of pressure.

With that being said, there were also times that reminded us that he’s not exactly Lamar Jackson, such as on the sack that he took on 4th and 1 in a tie game with under 90 seconds to play from the Seahawks’ 45-yard line.

Fortunately for him and the Steelers, the defense was able to force a fumble and get the ball back on the very next play, the subsequent drive featuring two nifty scrambles from the rookie quarterback and culminating in the game-winning touchdown.

For as great as he was, there is no question that Ben Roethlisberger’s limited mobility in his later seasons was a hindrance to the Steelers’ offense, especially as the performance of the offensive line receded to levels below mediocrity.

Saturday night served as a clear reminder of that as we watched Pickett and the other quarterbacks use their legs to make plays in ways we haven’t seen, except for brief cameo appearances by Joshua Dobbs, in the Steel City for quite some time.