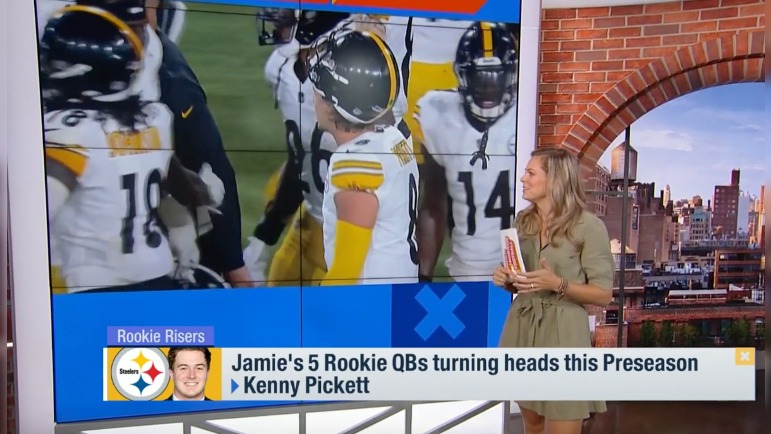 This week on GMFB which airs on NFL Network, show hosts have been holding segments ranking the top five rookies at their respective positions. Peter Schrager held a segment called “Five rookie WRs turning heads in preseason” and had Pittsburgh Steelers WR George Pickens come in at #2. Just a day later, Kyle Brandt held a similar segment, ranking his top five RBs that have made an impression thus far in the preseason, and started off his list with Pittsburgh Steelers RB Jaylen Warren at #5.

On Thursday’s edition of the show, new host Jamie Erdahl held her own segment ranking the top five rookie QBs turning heads in the preseason. As you would have guessed it, Erdahl topped the list with Pittsburgh Steelers rookie QB Kenny Pickett.

“My number one; is there anyone else except Kenny Pickett?” Erdahl said on GMFB. “Kenny Pickett has been praised throughout this preseason. He is the guy that can be making a name for himself for a starting spot for the Pittsburgh Steelers.”

It’s no surprise that Pickett took the top spot on Erdahl’s ranks, as the first-round selection out of Pitt has been tearing up in preseason action for the Pittsburgh Steelers. In two preseason games, Pickett has thrown for 171 yards and has the same number of TDs (three) as incompletions, with one of the latter being a spike to kill the clock. His performance thus far has been nothing short of exceptional, posting the best passer rating of all rookie QBs this preseason (138.6), and the best by a rookie since 2015.

Highest passer ratings among rookie QBs in a single preseason since 2015:

Not only has Pickett’s stats been impressive thus far, but he also has shown composure and poise in the pocket, leading the offense down the field on scoring drives both at the end of the game and right before halftime.

“He looks the part,” Erdahl said about Pickett. “That’s something I really picked up on my first month of the show is ‘Does the guy look the part’. For a while we thought it was Malik Willis, but so far, this young man in Pittsburgh has been the guy.”

For all intents and purposes, Pickett has been “the guy” so far this preseason, having the best performance of any of the QBs on the roster. Still, he is a rookie QB, and the team has stuck by Mitch Trubisky thus far as the likely Week 1 starter. However, Pickett’s rapid progression likely has at least played himself into the conversation of the starting QB job with the coaches and executives, and the preseason finale against the Detroit Lions on Sunday could go a long way in potentially deciding the victor.