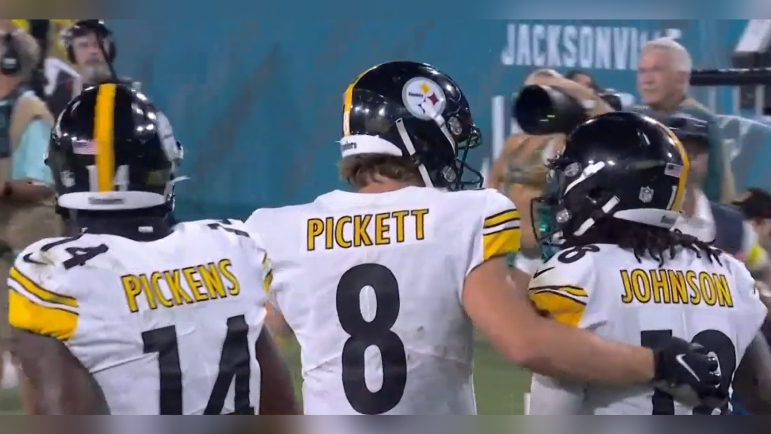 After the team’s 19-9 win over the Detroit Lions in their preseason finale, rookie quarterback Kenny Pickett talked to the media about the importance of continuity and working together as a team.

“You want to have as much time together as you possibly can. Obviously, I’m pretty new here, a lot of guys are new, so we don’t have that time where we’re throwing a lot of routes on air, and where I was at earlier in the preseason to now, I wasn’t getting as much reps, so you always just want more reps. So that’s the key. The game experience I got in preseason was awesome, but just more time playing together is all you want,” Pickett said via Steelers Live on Twitter.

With a lot of new faces on offense, getting acclimated to the offense and getting reps and working together is obviously important. While preseason is over, there are still two more weeks until Week 1 against the Bengals and the team will have a lot more time to work together and gel as a unit.

Pickett showed a lot of growth from the beginning of training camp until now, and he played really well when he got live reps in the preseason. While he’ll likely open up the season as the team’s No. 2 quarterback behind Mitch Trubisky, he definitely showed flashes of why the team took him with the 20th overall selection. The more work he gets with his teammates, the better he’ll be, and the more time he spends around the team, the more he’ll acclimate to the NFL which could help his game as well.

Early in the preseason, Pickett was mostly working with low-stringers. Against Jacksonville, he got more reps against starters, but with Mitch Trubisky playing more this week, Pickett was back working with mostly second-teamers. He still took advantage of the opportunity and played well, going 10-14 for 90 yards. With more reps comes more confidence, and while Pickett may not get live game reps for a while, he can use competitive situations in practice to continue to build and improve on his game.

Pickett has shown that he could be a starting NFL quarterback. Now, the goal is to improve enough to become a guy that could become a top starter and lead his team deep into the playoffs. Even though he probably won’t start Week 1 this year, he can take advantage and learn from Trubisky and Mason Rudolph, assuming Rudolph doesn’t end up getting traded and continue to grow and improve in practice.

I wasn’t all that high on the Pickett selection, but I love everything I’ve seen out of him so far and I really think he can be a good player in this league. Building those habits begins now, and I’m excited to see how Pickett develops throughout this year and into next season.