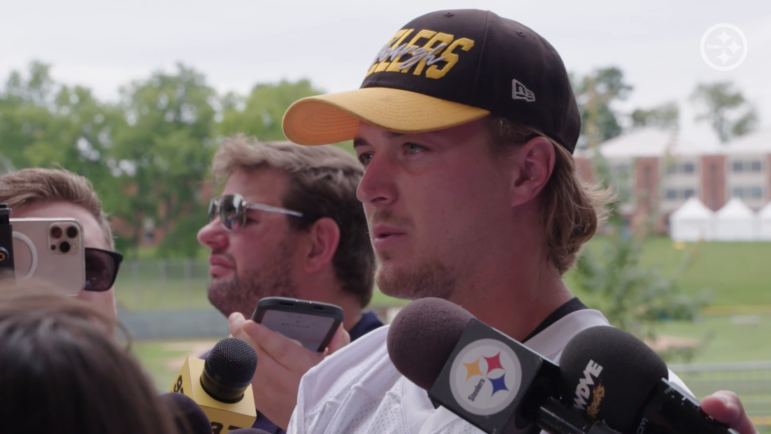 If there were reservations at draft time about the Pittsburgh Steelers taking Kenny Pickett, those have largely subsided for most fans of the team, especially among those who are not necessarily also Panthers fans, or college football fans in general.

The rookie quarterback has shown steady improvement over the course of the offseason, and has looked his best in stadium during the Steelers’ first two preseason games, throwing as many touchdowns, for example, as incompletions—and one of those incompletions was a spike to stop the clock on a drive that ended in a touchdown pass (or, actually, two).

Still, he’s not ready to hand himself the starting job, nor is he content with the work that he has already put in. While he is confident in the work and the talent that he has displayed thus far, there is still one quality that he hopes to demonstrate in the long run.

“Is there something I haven’t shown? Right now it’s consistency”, he told reporters, via the team’s website. “Just every day being the same guy, being reliable with my teammates every single week. That’s just something you’ve got to build over time, so as time goes, it’ll get there”.

The prevailing expectation remains that Mitch Trubisky will be the Steelers’ opening day starter, but it’s becoming increasingly accepted that Pickett is likely to take over the starting job at some point over the course of the year.

For his part, head coach Mike Tomlin has maintained that he still considers the starting quarterback position as undetermined heading into the final preseason game, and you can expect that Pickett will receive a healthy amount of playing time, whenever that comes.

I think there would be large consensus if I were to propose the argument that Pickett has clearly looked the best and most consistent during the preseason among the Steelers’ three quarterbacks who have played. Of course, all have faced different circumstances, but it has been during his time in the game that the offense has been most successful.

But can he really win the starting job on Sunday? Is that really up for grabs? As we get closer and closer to decision time, we only seem to be getting even more mixed messages. We have been promoted the idea for an extended period of time that the job was Trubisky’s to lose. Is he close to losing it, relative to Pickett also striving to win it?

To be quite honest, I don’t even know what to think anymore, but until proven otherwise, I’m assuming that Trubisky will be under center on opening day, even if it is not necessarily the decision that I would make. It will be very interesting to see how the two of them play on Sunday and whether that makes the decision easier or harder.