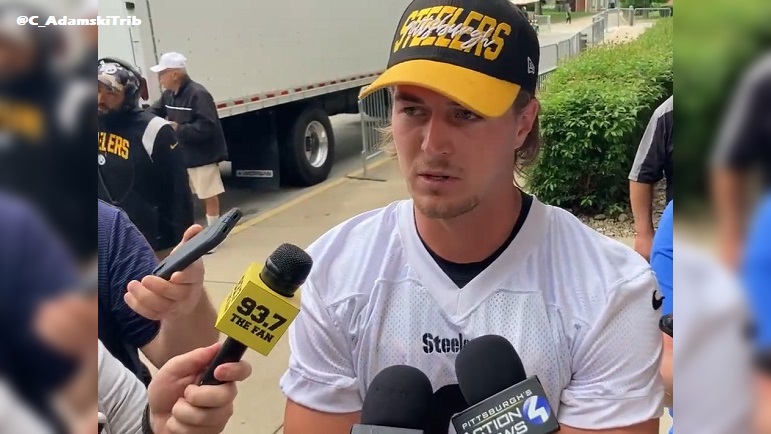 Talking to Chris Adamski of the Pittsburgh Tribune-Review and other media members before practice on Tuesday, Kenny Pickett said he believes there’s room for improvement following his first preseason game, via a tweet from Adamski.

“I thought I played fast, got the ball outta my hand. Some ball placement things I wish I had back, but I think it’s a really good first game to build on,” Pickett said.

He further clarified what he thought he could’ve done better.

“Ball placement, there was some plays I felt I could have gave the receivers some better yards after catch opportunities. So that’s something I’m definitely focused on this week at practice.”

Pickett certainly did play fast, as he increased his snap-to-throw time by over a second from what he averaged at Pitt. A potential result of that could be that his throws might not have gone exactly where he wanted them to, and that’s absolutely something he can work on.

Given that a lot of his throws were in the short-to-intermediate range, giving receivers a chance to catch and a run is important, so four to five-yard throws can become bigger gains. That wasn’t always the case on Saturday, and if Pickett isn’t going to air the ball out a lot for now, he needs to improve the ball placement so the team can pick up chunk yardage.

It’s good that he recognizes something in his game to improve this early, especially after a performance that was pretty sound overall. Pickett was 13-15 for 105 yards and two touchdowns and led a game-winning drive in the final seconds. Sure, he was playing with and against a competition lower than he would see in a regular season game, but it was a really nice showing for his first real game competition. Taking that into account, the fact he was able to take away a flaw in that game and still look for a way to improve is a good sign for a young quarterback.

I’ve been saying for a while that I really believe this year is going to be developmental for Pickett. I’m less convinced that the team is going to trade Mason Rudolph since Chris Oladokun hasn’t taken a real rep yet in practice, so I really wouldn’t be shocked if Pickett was third on the depth chart for a good portion of the season.

Having a year to improve and work on his game and fix whatever flaws, big or small, he might have could make the transition to him as starter a seamless one. If he plays this year, I think it will be because he’s proven he’s the best quarterback for the job or due to a rash of injuries. I still think it’s more likely we see Pickett’s first regular season action in 2023 unless he gets some reps late in a blowout or at a point this year where Pittsburgh is out of contention.

I like that he’s taking stock of where he needs to improve, even after a performance where he made minimal mistakes. We’ll see if Pickett’s ball placement improves on Saturday when the Steelers take on the Jaguars.