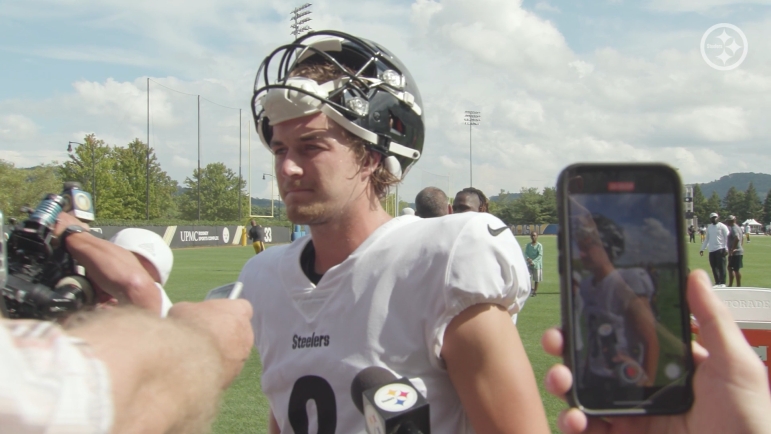 Right or wrong, any rookie quarterback taken in the first round is going to face a ton of scrutiny with every move that he makes on the field. Though he is just like any young player, in need of time to develop to the NFL level, the temptation to overanalyze his first snaps is about as enticing to many as the tree of the knowledge of good and evil, and there’s a talkative little snake lurking around.

Cue the dramatics over Kenny Pickett’s first week of training camp with the Pittsburgh Steelers—not just every throw he’s made, but with whom those throws have come. Indeed, he is currently toward the bottom of head coach Mike Tomlin’s self-admittedly meaningless depth chart, but that tells us little.

What’s more illuminating is seeing how he grows, both on the field and in his mind, and for him, he senses that development on the field this past week in comparison to the first week in Latrobe, and is gearing up for even better things this week.

“I feel a lot better, honestly. Just being able to play with these guys for a little bit, I thought it was a lot cleaner this week, being able to play at a much higher level”, he told reporters at the end of yesterday’s closed practice, via the team’s website. “Definitely feel good going into week three”.

By all accounts, the first-round pick did have a markedly better week of practice this past week than he did his first at Saint Vincent College, which should certainly surprise nobody. Not only is he new to the team, and to the offense, but he is new to the league. And even the venue is unfamiliar to him, even if he spent the past five years inside the UPMC Rooney Sports Complex.

Now, the question is whether or not he can continue to build upon his progress. He acknowledges that he “had a really good week”, and that the offense as a whole did as well, but he also recognized that it’s about “building off of each day”.

Unfortunately, the Steelers’ past two practices were closed to the general public due to inclement weather, so for the time being, we are working against an incomplete dataset, but hopefully we’ll be able to get back out there tomorrow and get a good look at the progress taking place on Chuck Noll Field.

And hopefully Chase Claypool, Pat Freiermuth, and Najee Harris, or a subset of the trio, will be out there as well. And, importantly, actually working with Pickett. The rookie has been running primarily with third-team personnel, mixed in with some second-team opportunities, but now is the time for the coaches to start sprinkling him into the first-team group.