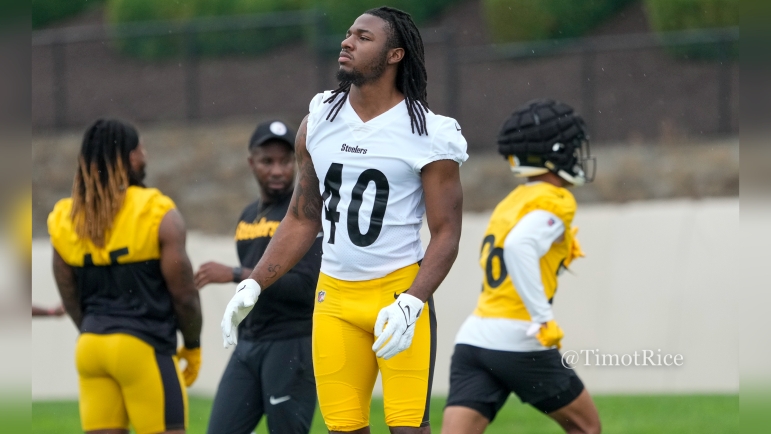 If you’re like me, you’d love the chance to be a General Manager. We all have our opinions on players throughout the draft process and throughout the season of who we would prefer to have on the team or active roster. I thought this might be a fun process to look at a group of players, give some background information on each player and see who you would keep. And yes, I understand you want to see how everyone does in training camp but try to play along.

I’ll give you three players from each position group, and you decide which two you will keep (one to the active roster, one to the practice squad) and one player to cut. At the end of this process, we’ll have a 53-man roster and a good portion of the practice squad built by you.

Najee Harris was selected last year to become the workhorse in the backfield, and he did not disappoint. Contributing over three hundred carries and nearly one hundred targets confirmed the workload we expected for him. He has an impressive work ethic and is difficult to take off the field. He will once again lead the way but there has been some talk of getting him more rest. I’ll believe it when I see it.

Benny Snell, Jr. saw a major decrease in his opportunities due to the addition of Harris. He saw his least number of offensive snaps and touches since he arrived in the league. He did see an increase in special teams play and had a career high seven tackles. Some fans have soured on Snell, but I believe the team is comfortable with him. He also has the most experience of the players fighting to back up the starter.

Derek Watt has yet to be a huge part of the offense, but he is the only true fullback on the roster as well as being a strong presence on special teams. He played just 86 snaps on offense with only four touches but there is a possibility he could be used more as a pass option in an offense with a mobile quarterback. He led the team in special team tackles and will be on the 53 barring injury.

They usually keep three running backs on the roster and one fullback. Let’s take a look at the other candidates.

After a rough rookie season in 2020 there was some hope that the game would start to slow down for him, and he would be able to showcase his speed in year two. Unfortunately, an injury put him on injured reserve in September and once he returned, he was unable to find a role. Coming into this season his goal is to find that role on offense or special teams as return man.

On the positive side, he has the one trait that the entire offense was really lacking last season and that is speed. It was evident in his rookie season, but he just needs to learn to harness it. He has some experience compared to the other players with 36 carries and seven receptions. With the writing on the wall, he has realized his roster spot is in jeopardy and hopefully he can use that to his advantage.

On the negative side, he was rough in his rookie season. He had one gear and would go to top speed right away causing him to miss on gaps. He didn’t display the patience or vision to read and set up his blockers find the running lanes and doesn’t break tackles. When he did play, he was given one or two series a game having little effect when used. Since he has been in the NFL, he has played just 8 snaps on special teams.

A free agent addition after the 2022 draft, he is one of three rookie running backs trying to make the team. He began his collegiate career on the junior college route playing for Snow College spending two years there before going to Utah State. As a junior he had a solid season rushing for 569 and 5 touchdowns along with 15 receptions for 182. He played in three games in the next season before redshirting leading to his next location at Oklahoma State. His final season he registered 1,216 yards rushing with 11 touchdowns and adding 25 receptions for 225 yards.

On the positive side, he has more bulk than the others on this list listed at 215lbs. He caught the eye of the coaches early in camp with is willingness to compete especially in the backs on backers drill and his conditioning when given the opportunity with injuries to other backs. He has the size to pound inside the tackles and shiftiness to make a defender miss. Like most rookies, he is willing to do whatever it takes.

On the negative side, he doesn’t provide the speed that the offense needs. Per our report, he doesn’t avoid defenders well in the backfield and doesn’t break many tackles. His road to the team is most likely on special teams so will he show the ability to make plays.

Also a free agent added after the 2022 draft. He was an intriguing addition as a slender, speedy back where the recent running backs have been the bigger, physical backs. For his career at Duke he was starter in 12 of his 44 career games. He did total 489 carries for 2,562 yards and 18 touchdowns. As a receiver he has 55 total receptions with nearly half of those in his senior season. He gained 480 yards with 4 receiving touchdowns.

On the positive side, he is fast notching a 4.38 forty-yard dash. He has good vision, burst and gets up to speed quickly flashing the explosiveness the offense needs. He catches the ball well and was also used split out wide. As a pass blocker, he has shown willingness and mental processing to identify pass rushers and get into proper position.

On the negative side, his has a slight build and lacks the power to break tackles consistently. His contact balance is adequate and was limited when trying to make a defender miss in space. He was not used as a return man in college and with his size that is something where you expect he would have to contribute to make the team.

Others on the roster: Master Teague III