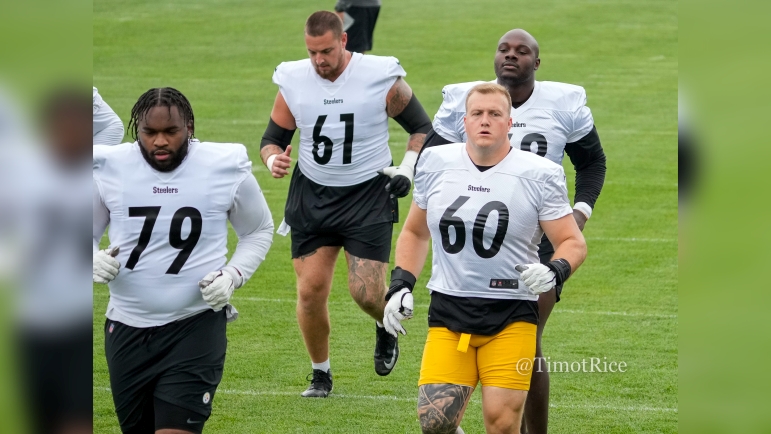 The running game was bad last season so changes had to be made. Free agency provided the team the opportunity to add veterans to attempt to solidify the offensive line. Mason Cole was one addition and is listed as the starting center. He also played left tackle in college. He spent three seasons in Arizona and one in Minnesota and has played in 60 games with 39 starts. As the center, it will be his job to keep the group on the same page to play cohesively.

James Daniels was added the same day as Cole after spending four years with the Chicago Bears. He has versatility to play guard or center. After spending a lot of time at left guard he is listed as the right guard on the current depth chart. Over his four seasons he has played in 54 games with 48 starts. Early in camp he has taken on a leadership role.

After a promising rookie season, year two was not a repeat for Kevin Dotson. After spending most of his collegiate career and first season at right guard he was moved to left guard and never got comfortable. Add in an ankle injury later in the year and 2021 was a struggle. Through two seasons he has played in 22 games with 13 starts and he will have to earn the starting job this year. He has competition as he is currently listed as a slashed starter at left guard.

Kendrick Green is the other slashed starter at left guard. In his rookie season he played center and he had his struggles. Evidently he did not like playing center so hopefully he will find comfort playing alongside the center. He started all 15 games he appeared in playing nearly a thousand snaps in his first season.

For this exercise we are looking to keep five interior offensive linemen on the 53 man roster and one other on the practice squad. Here are the candidates.

After signing late in 2019, Hassenauer did well to put himself in the mix over the past two seasons. The former Alabama center has appeared in 30 games with 8 starts including the playoffs since the 2020 season and has managed 649 offensive snaps and 108 special team snaps. In 2021 he started the final two regular season games along with the playoff game.

On the positive side, those two years of experience make him the elder statesman of these players. He is listed as the primary backup at center and earned that with his play at the end of last season. He has the versatility to play all three interior spots and has just 2 accepted penalties in his career. In 2021, he did not allow a sack and has caught the eyes of some in camp.

On the negative side, the team brought in multiple players to the positions he plays despite how he played. Cole, Green and Daniels can all play center so do they need to keep another? He allowed five pressures in limited playing time last season.

John Leglue was initially added to the practice squad in December of 2020. He was waived at the end of camp in 2021 but was quickly resigned. His first action came in week 13 and ended up starting the final five games of the regular season and the playoff game. He logged over 400 snaps late in the season.

On the positive side, when called upon he stepped in and played solidly getting some praise from is offensive coach. He was a tackle in college and even was a long snapper for a time in college but fits better as a guard. The late season taste as a starter can be a good motivator.

On the negative side, like Hassenauer those free agents signings put him behind the eight ball. Dotson, Green, Daniels and Hassenauer have more interior flexibility. He doesn’t have the center experience or the overall experience the others have.

Owens is another player from Alabama and he was added as an undrafted player this year. He started 20 games in college and that included 12 at right tackle and also has experience at center. He profiles as a guard in the NFL and has really good length with 34 inch arms with strong hands.

On the positive side, he comes from a university that produced a large amount of quality NFL lineman. His length and hand strength are important especially in pass protection. He has versatility to play multiple positions.

On the negative side, obviously he has the least experience and despite the retooling of the offensive line experience is too valuable to ignore. From Alex’s report he has technical issues that need work including his footwork and hands in pass protection.

Also on the roster: Nate Gilliam