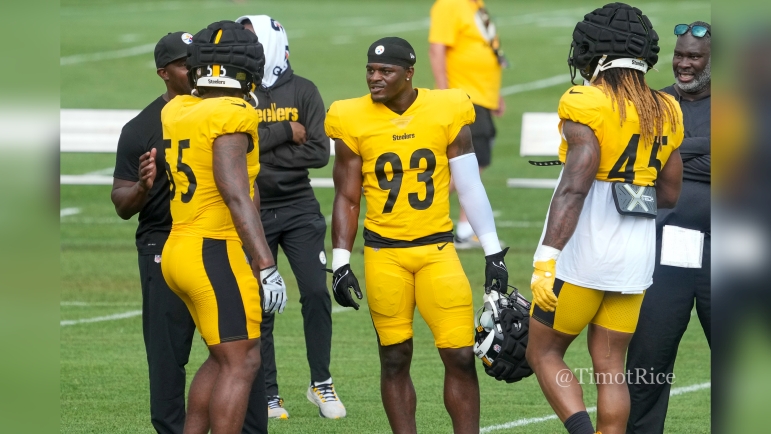 Inside linebacker was a position with issues last season and still may be but Myles Jack is a strong addition to the defense. Jacksonville let him go and the Steelers brought him in to help solidify the position. The former second round pick has been a consistent player with three seasons with over 100 tackles. He has said he is looking forward to playing behind the team’s defensive line and knows he doesn’t need to try to do too much.

The enigma that is Devin Bush continues to leave us all scratching our heads. After a promising rookie year where he finished third in the Defensive Rookie of the Year voting a knee injury in year two halted his growth. The injury was in his head in year three and it showed in his play. The hope is this year he can regain some of the form from year one. He has a chance to start this year and frankly they need him with depth issues at this position.

Robert Spillane can smell blood in the water and is gunning for the starting position. Entering his fourth season with the team he has proven himself as a strong special team player and has made some big plays on defense. Mike Tomlin loves positional competition and the staff has noticed what he has done physically and mentally in camp. The battle between him and Bush should go down to the wire and may continue into the season.

They could keep four or possibly five at this position group. Here are the candidates.

Allen was signed to an original round tender to stay with the team this season. He was a safety in college but has transitioned to linebacker in the NFL. In four years, he has played in 35 games with 3 starts. Including the playoffs, he has 47 tackles with two for a loss. He is a core special team player with 516 snaps while adding 286 on defense.

On the positive side, he is a mainstay on special teams and contributed 6 tackles there last season. He has also contributed at times as a coverage linebacker on the defense. The team knows what they are getting making him less of a mystery than the others on this list.

On the negative side, his snaps on defense decreased from 206 in 2020 to 62 in 2021. He is undersized so if he were called upon to play full time it could be a struggle. He’s fighting against younger, bigger linebackers either of which could take his place on special teams. A hamstring injury has hampered his availability in preseason.

A fourth round pick in 2021, Johnson came in as a fairly raw player. In camp last year he failed to impress but was still given a helmet the first two weeks of the season. Unfortunately after that he spent the majority of the season inactive. Last year, he appeared in four games and had two solo tackles. He played a total of 6 plays on defense and 59 on special teams.

On the positive side, he is entering year two and has hopefully impressed enough to earn more of an opportunity. In the first preseason game, he played 46 snaps and led the team with seven tackles. He has good size and would add some bulk to the group. He the best fit as a BUCK linebacker behind Jack.

On the negative side, his rookie season was obviously low on encouragement. With the inconsistencies with the players ahead of him, he hasn’t been able to push his way into starting consideration so far this season. Only two tackles on special teams in 59 snaps.

If Johnson was raw, coming in Robinson may be still mooing. After switching from running back he played one season at linebacker in college. He has intriguing athletic traits and plays with promising physicality. He has confidence and is making the effort to learn from his peers. His road to the roster is through special teams.

On the positive side, being a former running back it could help in reading blocking schemes and in coverage. He is a run and hit linebacker and packs a punch. In his first career preseason game he played 33 snaps, had five tackles and came up with the big play to force a turnover that led to the game winning drive.

On the negative side, being that he is super raw the road ahead will be bumpy. Just one year at the position you can’t expect him to be ready to contribute right away. In the first preseason game, he did look a bit confused in coverage. The team has a lot of quality special team players so he would have to be really impressive to get a roster spot.