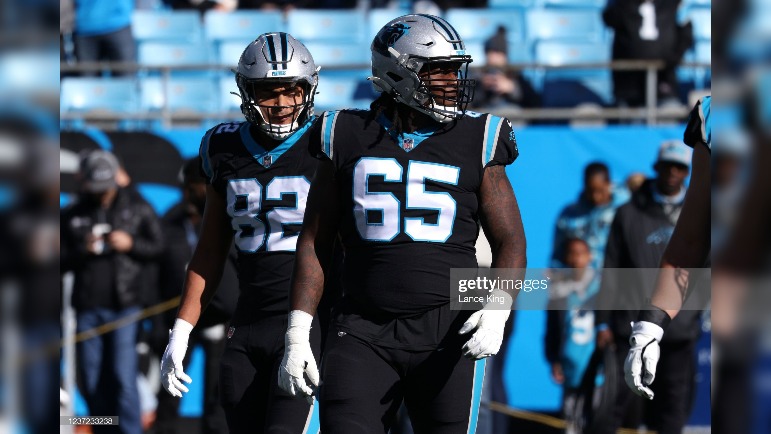 The Pittsburgh Steelers acquired OL Jesse Davis from the Minnesota Vikings yesterday, sending over a mere 2025 conditional seventh-round selection to get the deal done. The move to add Davis was much-needed for a Pittsburgh team that has been lacking depth along the offensive line, particularly at offensive tackle, since the team reported to Latrobe for training camp. However, ESPN insider Jeremy Fowler tweeted Wednesday that Davis wasn’t the first name that the Steelers were looking at regarding a potential trade to beef up the offensive line.

#Steelers were eager to get OL help this week — they were the team that came up most often in regards to trades for that position. Multiple teams believed they were in on Dennis Daley (who went to TEN via trade). Eventually got Jesse Davis.

According to Fowler’s sources around the league, the Steelers were in on acquiring OL Dennis Daley from the Carolina Panthers who ultimately got dealt to the Tennessee Titans. The Panthers sent their 2024 seventh-round pick and Daley to Tennessee in exchange for a 2024 fifth-round selection. Daley was a sixth-round pick in the 2019 NFL Draft and has played 34 career games, with 21 starts. He has logged 13 starts at LT, seven at LG, and one at RG. Daley started nine games last season for Carolina with five coming at LG and four at LT.

Fowler mentioned that Pittsburgh has been at the forefront of trade conversation regarding the offensive line, and for good reason. The unit has been inconsistent during the preseason and has lacked the depth behind the current starters to leave you feeling comfortable going into the regular season should a starter go down to injury. In fact, Pittsburgh released OT Joe Haeg as a mild surprise yesterday after dealing with a concussion but had just returned to practice before getting his walking papers.

While the Steelers successfully acquired Davis, he projects more as an interior player at guard with his tape at OT being shaky, at best. We may see Pittsburgh bring back a familiar face in Trent Scott or possibly see Haeg revert back to the team, but given Pittsburgh’s interest in the trade market for OL that Fowler has reported, there’s a chance they may not be done shuffling up that group prior to the start of the regular season.