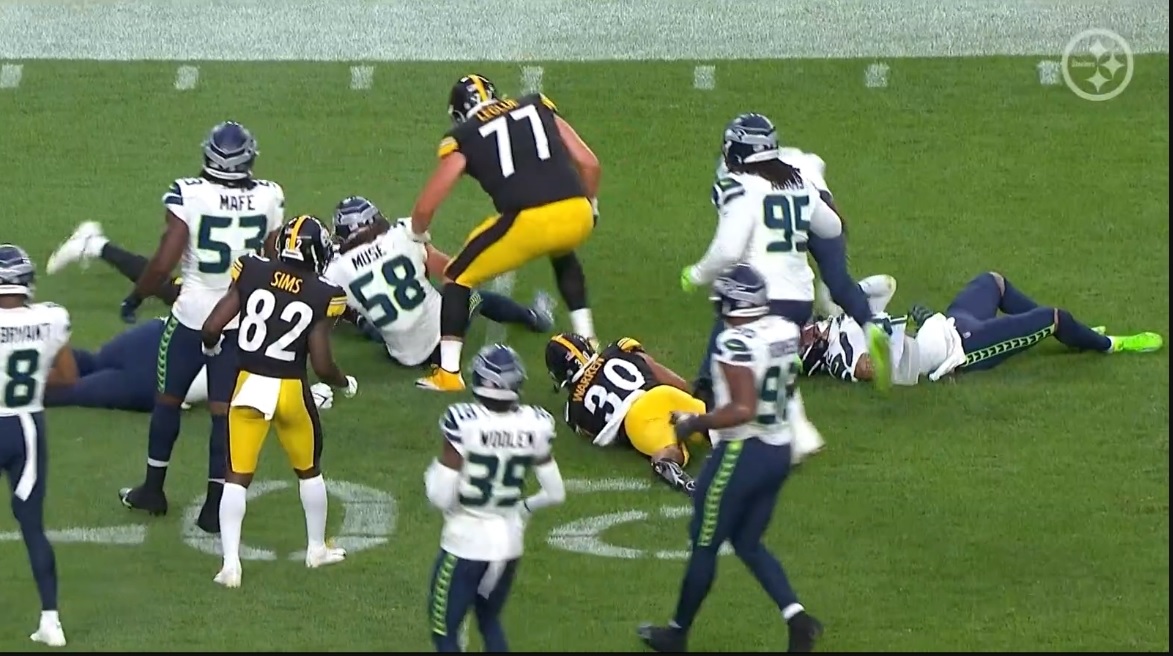 It was the first time out for a large chunk of the Pittsburgh Steelers’ 90-man roster in Saturday night’s win over the Seattle Seahawks, including rookie running back Jaylen Warren. A bowling ball in pads, Warren gained buzz and carried over that inside Acrisure Stadium. Unfortunately, he brought not only his break tackle ability but his fumbles. Speaking to the media following the game, Mike Tomlin made sure to note both.

“I didn’t like Jaylen putting the ball on the ground,” Tomlin said via the team’s YouTube channel. “I appreciate his tackle-breaking and contact balance but that standard of expectation is non-negotiable. He’s gotta get better there. These are good days provided we take care of the ball and we didn’t do that. Thankfully we got it back. So we got to get better.”

Warren finished the day with a colorful stat line, carrying the ball six times for 34 yards, four receptions for 30 yards and a touchdown, and that fumble. He put the ball on the ground at the end of a strong run, breaking tackles and gaining 13 yards before Seahawks’ safety Marquise Blair popped the ball out. It rolled forward and recovered by Miles Boykin, keeping the Steelers’ driving and eventually coming away with a field goal.

It wasn’t the first time Warren’s fumbled, putting the ball on the ground earlier in training camp. While he’s impressed with his power and competitiveness, fumbles are the quickest way to the doghouse. Mike Tomlin especially loathes bad exchanges and fumbles, telling Steelers.com’s Bob Labriola as much in an interview posted Saturday morning. For Warren to be trusted and make the roster, he must take better care of the football going forward.

Overall, Pittsburgh’s running backs shined in the opener. Anthony McFarland got the start and ran hard, bursting down left side for a 24-yard gain on an early 3rd and 1. Warren filled out the middle and caught Kenny Pickett’s first touchdown pass on a bootleg to the right while Master Teague churned out tough yards at the end. Benny Snell didn’t play due to injury but figures to still safely be on the roster, likely leaving one spot open for McFarland, Warren, and Teague. At worst, the losers should make the practice squad. For Warren to be part of the 53-man roster come Week One, he’ll have to continue to run hard. He’ll also have to stop fumbling. Giving the ball away is the equivalent of giving away your roster spot.