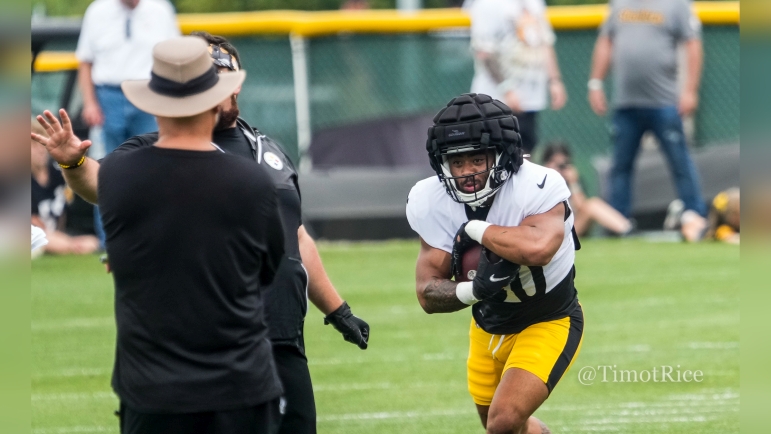 With injuries to RBs Najee Harris and Jeremy McNichols, the lines at the running back position have been running thin as the Steelers hit the midway point of the second week of training camp. While it’s unfortunate to have Pittsburgh’s workhorse back off the field, Najee’s absence has created the opportunity for more reps to be dispersed amongst the other bodies in the room.

UDFA RB Jaylen Warren has seemingly benefitted from this opportunity, sticking out to Alex Kozora of Steelers Depot with his work in backs on backers as well as Mike Tomlin, who called him “highly conditioned” and said he is making the most of the reps allotted to him with the injuries to players ahead of him on the depth chart.

Warren spoke to the media after practice Tuesday, reiterating that he made sure to come into camp conditioned and ready to go should the opportunity present itself.

“Ya, I’m just working my way up,” Warren said after practice according to video on Pittsburgh Tribune-Review’s Chris Adamski’s Twitter page. “I would say I’m kind of conditioned and a way to take nothing for granted and just work for everything.”

As Dave Bryan has stated numerous times, the running back position is one that comes with more fungibility than other positions in the game of football. The drop off in play from one runner to the next outside of the All-Pro backs in the league can be minimal. Given the running back’s shelf life in terms of handling a heavy workload and experiencing natural drop off in performance with more wear and tear, NFL teams tend to be hesitant in handing out large amounts of guaranteed money on extensions to the position, and often filter through starting RBs every 3-4 years.

This reality is only heightened for a guy like Warren, who is coming to Pittsburgh as a UDFA, having no draft capital to his name and being readily expendable for another young back on the street looking to sign with a team. Thus, it’s imperative to make you mark early and show teams you belong and can contribute to stick on the roster. Warren has done that thus far in training camp, and attributes his shiftiness and change of direction ability as one of his strengths that he brings to the table.

“I guess it has just always been my thing,” Warren relied regarding his shiftiness. “I’ve never been the fastest coming out of high school. I wasn’t really highly recruited because my top end speed wasn’t the greatest. So, I guess that’s just one thing to stick with me is just my cuts.”

Warren didn’t break the stop watches with a 4.55 40 time at the NFL Combine this spring, but he has showcased a distinct ability to break and evade tackles based on a film room we conducted on Warren shortly after he signed with Pittsburgh after the draft.

Having a short, stout frame, Warren can be a bowling ball at times, utilizing his low center of gravity to win the leverage game and churn his legs for extra yards on contact. Still, Warren does possess notable shiftiness as a runner, especially when allowed to make one cut in space. Per Pro Football Focus, Warren was credited with 85 forced missed tackles on runs and nine forced missed tackles on receptions (94 total) during the 2021 season. He doesn’t possess Alvin Kamara or D’Andre Swift shake, but for a stout runner, Warren can make defenders miss.

He will have to continue to string together good practices as well as a good showing in the preseason to usurp either Benny Snell or Anthony McFarland for a roster spot, but Warren is doing all of the right things to be in the thick of it as Pittsburgh nears its first preseason game.