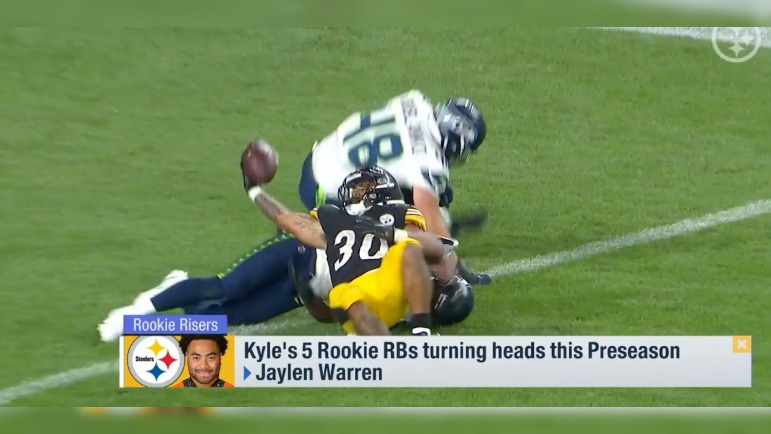 On Tuesday’s edition of GMFB on NFL Network, show host Peter Schrager held a segment called “Five rookie WRs turning heads in preseason”. Coming in at #2 of his list of rookie WRs is none other than Pittsburgh Steelers WR George Pickens. Just a day later, Kyle Brandt held a similar segment, ranking his top five RBs that have made an impression thus far in the preseason and started off his list with Pittsburgh Steelers RB Jaylen Warren at #5.

“This guy looks the part; I like how he is playing,” Brandt said regarding Warren on GMFB. “Now Najee Harris is going to be the guy, but this doesn’t look like a change-of-pacer. He’s 5’8. He’s slippery as hell. He’s tough. He looks a lot like James Conner.”

Warren has been a training camp darling of sorts for the Pittsburgh Steelers after signing as a UDFA out of Oklahoma State. He has routinely made plays in training camp as a rusher, receiver, and as a pass protector, showing the skill set to potentially be more than a change-of-pace back like Brandt mentioned. Warren also has been Pittsburgh’s most effective running back thus far through two preseason games, recording nine rushes for 37 yards and seven receptions for 54 yards and a receiving TD from Kenny Pickett against the Seahawks.

As Brandt pointed out in his blurb on Warren, he is an elusive shifty back that excels at breaking tackles due to his compact size and running style. He can make you miss in space with a subtle jump cut but he also possesses the low center of gravity to run through arm tackles and bounce off contact while staying upright. I conducted a film room earlier this summer detailing Warren’s tackle breaking ability and thus far through preseason play, Warren has posted the highest avoided tackle rate among rookie RBs.

Brandt also pointed out that Jaylen Warren is cousins with “Fast” Willie Parker based on the research that NFL Network did prior to the segment. This was the first I have heard of Warren and Parker being tied together by relation which is an interesting nugget given that Parker was also a UDFA RB out of UNC in 2004. While Warren may not possess Parker’s game-breaking speed, he has shown a well-rounded skill set thus far in his time with the Steelers, appearing to be the best man for the job to spell Najee Harris when needed.

Hopefully, Warren can follow in Parker’s footsteps and make the team after going undrafted and be a meaningful contributor in Pittsburgh for years to come.