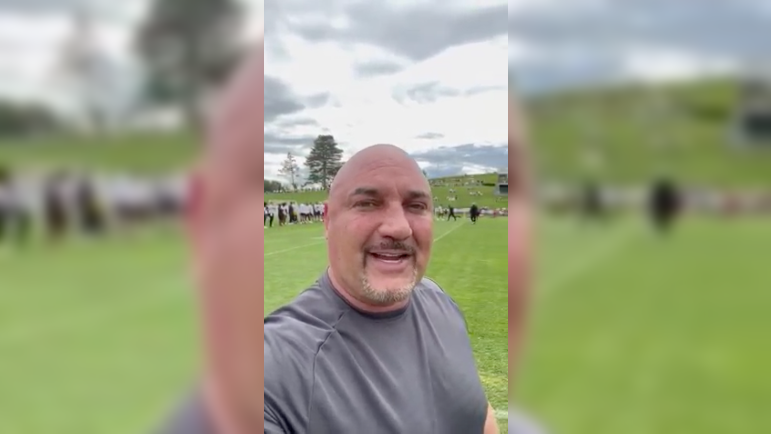 Fox Sports analyst and NFL insider Jay Glazer is pretty plugged in overall when it comes to not only the league as a whole, but the Pittsburgh Steelers in general, thanks to his close relationship with Steelers head coach Mike Tomlin.

So, when he speaks about the Steelers it’s certainly worth listening to and monitoring. On Wednesday, Glazer did just that, taking a selfie video from Chuck Noll Field at Saint Vincent College in Latrobe. In the video, Glazer — who spent the last few days at Steelers training camp with Tomlin — stated that there really isn’t much of a competition or controversy at quarterback for the Steelers because, as he says, veteran Mitch Trubisky is “the guy” for the black and gold.

“…People still think there might be a quarterback controversy here. There’s not; it’s Mitch Trubisky. That’s the guy. He’ll be the starter here. They do love Kenny Pickett,” Glazer said, according to video from his Twitter page. “This will be Mitch Trubisky’s team. When you talk to people around here, they have so much confidence in him, and I think that’s one of the things that, you know, Mitch’s gotten beat up in his career. So to have a guy now where they fill his confidence up, they certainly think they can win with Mitch Trubisky.

“And I think that there’s a lot of people out there rooting for Mitch Trubisky. This is Mitch’s team,” Glazer added. “He’ll be the starting quarterback this year in Pittsburgh…but they got their future also in Kenny Pickett.”

Out here at @steelers training camp. My thoughts on this team entering the season and the #Steelers starting QB “battle”. @NFLonFOX #GlazeAcrossAmerica #NFLTrainingCamp pic.twitter.com/yYVzODLhda

Though nothing is truly surprising here from Glazer, it’s worthwhile to mention because when Glazer says it, it’s usually fact.

Despite the talk all offseason around the Steelers being about a three-way starting quarterback competition between Trubisky, Mason Rudolph and Pickett, Trubisky has been prepared as the starter all along, starting in OTAs, continuing into minicamp, and now into training camp where he’s consistently gotten the first-team reps.

Quite honestly, it would be fair to say there’s a competition for the backup quarterback job between Rudolph and Pickett more than there is for the starting job with Trubisky. He was signed as “the guy” for a transition season out of the Ben Roethlisberger era. He’ll get the chance to not only rebuild his career, but try and win some games and essentially audition for another team, as Pickett is very clearly the intended future.

There’s still a lot of football left to be played between now and the Sept. 11 opener on the road against the Cincinnati Bengals, and a lot could transpire between now and then, but it’s looking more and more like Trubisky’s job. When Glazer says it, you can usually bank on it.