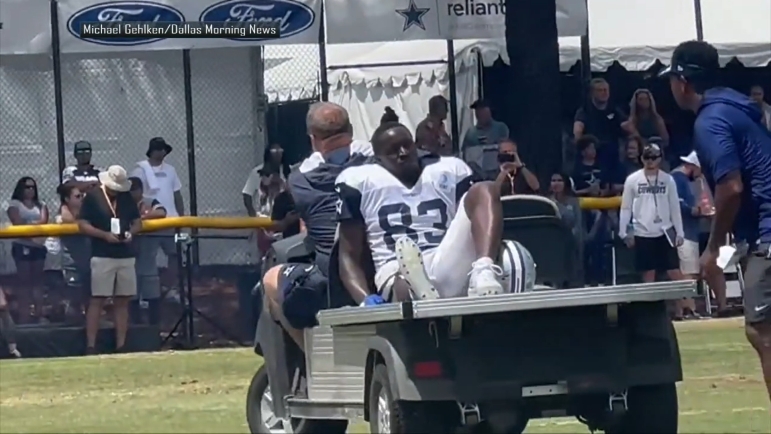 The Pittsburgh Steelers lost three wide receivers in free agency, including two former second-round draft picks. While JuJu Smith-Schuster is apparently impressing his new team, the Kansas City Chiefs, however, James Washington will now have to wait a while before he can make much of an impact.

The fifth-year veteran unfortunately suffered a significant injury in practice yesterday, and is scheduled for surgery today to address his fractured foot. Washington had his leg landed upon by cornerback Trevon Diggs during a practice rep, going for a deep ball in 7-on-7 work.

According to reports last night, he is now expected to miss six to 10 weeks, which means that he is in all likelihood going to be unavailable for the start of Dallas’ regular season, and perhaps even the first month or more.

While the Cowboys have CeeDee Lamb as their number one wide receiver, Michael Gallup is still rehabbing from a torn ACL and is currently on the Physically Unable to Perform List. They did draft Jalen Tolbert in the third round this year. Noah Brown is currently the only wide receiver practicing right now other than Lamb who has ever caught a pass from Dak Prescott, according to Jamison Hensley of ESPN.

The 60th-overall pick in the 2018 NFL Draft by the Steelers, Washington never developed into a full-time starting wide receiver. His most productive season came amid injuries in 2019. Quarterback Ben Roethlisberger injured his elbow and missed most of the season, while Pro Bowl wide receiver JuJu Smith-Schuster missed extended time due to injuries of his own.

That year, he led the team with 735 receiving yards, doing so on just 44 catches for 16.4 yards per catch. It only translated into three touchdowns, in which category he would set a career high the following year with five.

He finished his Steelers career with 114 receptions in 60 games for 1,629 yards and 11 touchdowns. He only caught a little over 50 percent of the targets directed his way, though he only had 13 drops on 218 total targets, far from an obscene number.

With the team moving on with Diontae Johnson and Chase Claypool (their day two picks at the position in the two years subsequent to their selection of Washington), he walked in free agency, gladly so, as it meant that he would be able to play for the Cowboys, his ‘hometown’ team. He signed only a veteran-minimum deal worth $1.05 million, and was hoping to establish himself as a starting-caliber player on a ‘prove-it’ contract.

While that is still a possibility, he is now in danger of falling behind due to injury. He could miss more than a month of the regular season, by which point they will have established working relationships with others. It’s quite an unfortunate turn of events for a young man who has consistently by all reports been regarded as a hard worker and a good teammate.