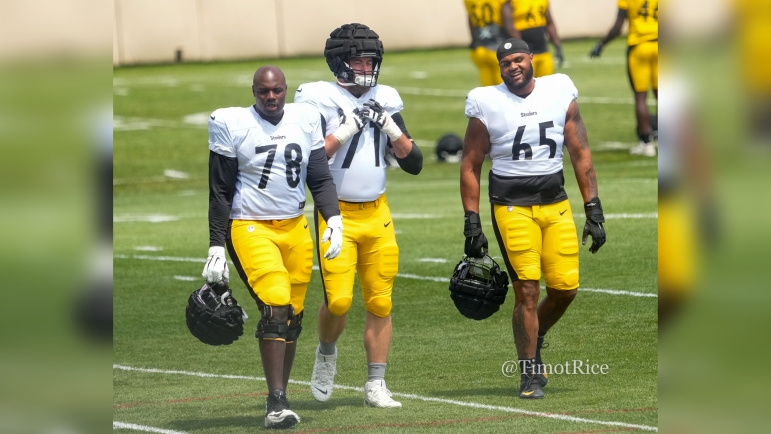 The Pittsburgh Steelers are continuing to search for a stable offensive line two years after having broken up their core at the position. Their method this year was to exploit veteran free agency to bolster the starting lineup, signing James Daniels at right guard and Mason Cole at center.

They join fifth-year veteran Chukwuma Okorafor as well as a pair—or a trio—of young players in their second or third seasons, with Dan Moore Jr. at left tackle, and Kevin Dotson and Kendrick Green competing for the left guard spot. And they’re growing together, using their time at training camp to accomplish that, almost as a matter of course.

“We’re really close right now. We always eat lunch with each other, eat dinner, eat breakfast”, Daniels told reporters following Thursday’s practice, via the team’s website. “We’re in the same locker room with each other, so it’s been going really well so far”.

Daniels and Cole are the newest members of the group, but also the most experienced starters from their time on other squads. Moore and Green are only entering their second seasons, with Moore having a more established role and Green fighting for his. But the training camp environment at Saint Vincent College has made that camaraderie come together more naturally.

“It takes time. I mean, when we’re here, we have like 13-hour work days”, Daniels said. “We all have families, but we don’t get to see our families, so you build it fairly fast just being here all the time. So I would say there hasn’t been any obstacles”.

How that translates to the field in a real game setting remains to be seen. For his part, Daniels suggested that he didn’t think it was particularly necessary for the group to log a ton of snaps together during the preseason, nor did he think it was overly necessary for him to be more familiar with who the other guard is, since they don’t play alongside one another.

He does know who his center, Cole, and his right tackle, Okorafor, will be. Left guard is the only unsettled spot, so that’s more a matter for Cole and Moore, but they do know that it’s going to be either Dotson or Green. Moore started nine games next to Dotson last year, and he was draft classmates with Green, though the latter only played center for the Steelers in 2021, so they did not play in tandem.

With the Steelers now in preseason mode, however, their time in Latrobe is almost up. Their final practice open to the public at Chuck Noll Field will be on Thursday, August 18, before they return to the UPMC Rooney Sports Complex as they ramp up for the end of the preseason and get ready for the games that count.

By then, we can only hope, the offensive line is where it needs to be, both off and especially on the field.