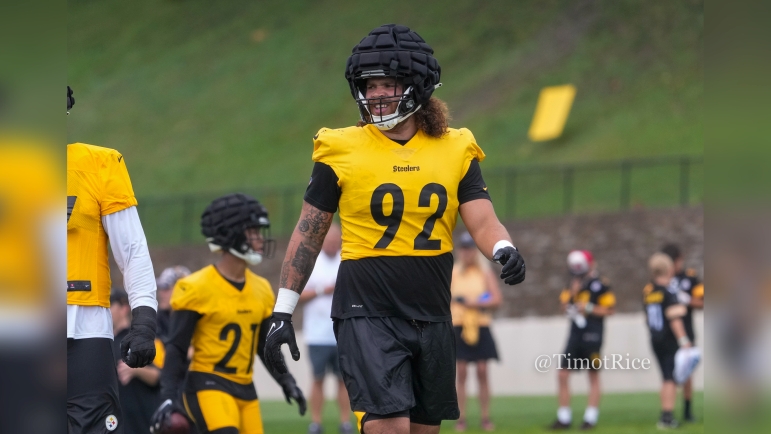 After being pushed into the lineup late in his rookie season due to injuries and poor play in front of him, defensive end Isaiahh Loudermilk seized upon his opportunity in 2021, playing well down the stretch — especially against the run — putting himself firmly in the discussion to have a role in the rotation in 2022.

Building upon that strong close to his rookie season, Loudermilk hit the offseason hard, adding weight and strength while developing his pass rush repertoire. Now, entering the second full week of padded practices at training camp at Saint Vincent College, Loudermilk continues to draw plenty of attention for his impressive jump in play he’s taken so far this season. He’s played rather well against the run and has shown flashes of pass rushing prowess.

His development physically and mentally entering his second season into the NFL drew some praise from Steelers head coach Mike Tomlin Tuesday, who spoke with reporters following practice Tuesday morning at Chuck Noll Field after a schedule change, according to video via Steelers.com

“I think he’s taking the step that we would anticipate. But obviously there’s a lot of ball out in front of him and us, so that remains to be seen, but he’s done a great job of shaping his body,” Tomlin said to reporters Tuesday, according to video via Steelers.com. “He came highly conditioned per his position, and so he has positioned himself to do the things that we expect, guys like him to do the second lap around the track with the knowledge of the journey and a certain level of expectation at least culturally, what we’re trying to do from an environmental standpoint, is a leg up for those guys.

“And so, we expect those plays to come with it.”

That experience gained in 2021 has certainly helped Loudermilk know what to expect in the NFL entering Year 2, which helped him not only put on weight, but develop strength to hold up at the point of attack much better this season compared to last.

Though he’s stood out in training camp early on, it’s not unexpected, per Tomlin’s words. This is his second training camp in the NFL, though it is his first at Saint Vincent College in Latrobe. He’s familiar with the scheme, knows the expectations of being a Steelers defender on and off the field, and knows how to prepare each and every day.

His development into a solid depth player for the Steelers in 2022 and beyond would be a huge win for the Steelers. There’s still a lot of football ahead for Loudermilk, like Tomlin stated, but so far, so good for the second-year pro.