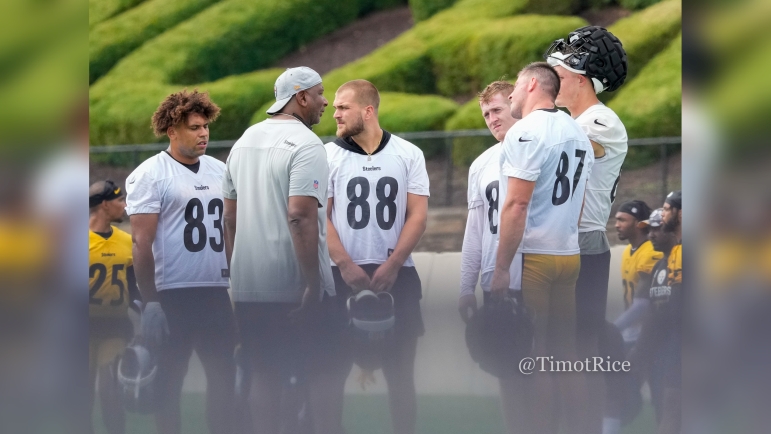 Connor Heyward may literally be Cam Heyward’s younger brother. But the vets in the tight end room treat Connor like he’s their little bro. Sitting down with Steelers.com’s Missi Matthews in an interview posted today, Heyward gave an outline of the tight end room dynamic.

“It’s a really close knit,” Heyward told Matthews. “Everybody gets along really well. Everyone’s pushing each other. We like to mess around, but we also know when it’s time to be serious. Zach’s the oldest one. Obviously Pat’s a great player but they’re both really good leaders. They kind of treat me like the little brother, kind of mess with me sometimes. But I’m thankful for them.”

Unlike say, the offensive line or cornerback room, the tight end room is naturally small in number, even for a summer 90-man roster. There were just five throughout the entire camp: Pat Freiermuth, Zach Gentry, Kevin Rader, Jace Sternberger, and Heyward, with no outsider being signed during training camp. Freiermuth and Gentry are locks at the top, while Heyward has moved into the driver’s seat for the third spot.

He’s enjoyed a good, though at times bumpy, summer, coming on strong with a solid first preseason game and especially impressive final week of camp. Heyward is a different body type than the other tight ends in the room, he was playing running back at Michigan State just two years ago, but he’s a plus athlete with strong hands who catches away from his frame. He’s a far cry from Heath Miller, but recalls H-backs of an era long ago, a Larry Centers or John L. Williams type of player.

As a whole, the Steelers’ tight end room is young. Like Heyward mentions, Gentry is the oldest, but he’s still just 25 and has barely more than 500 career offensive snaps. A year ago, he was fighting just to make the roster. But they’ve had to grow up fast with Freiermuth thrown into the fire as a rookie, while Gentry’s role quickly expanded last year, becoming the team’s blocking tight end. Positional coach Alfredo Roberts has worked that group hard, and now he’s tasked with molding Heyward into a viable weapon and serviceable blocker.

Guys like Freiermuth and Gentry aren’t pushing away their “younger brother.” They’ve embraced him, and should Heyward become a role player on the Steelers, Pittsburgh will have a quality room top to bottom in play and personality.