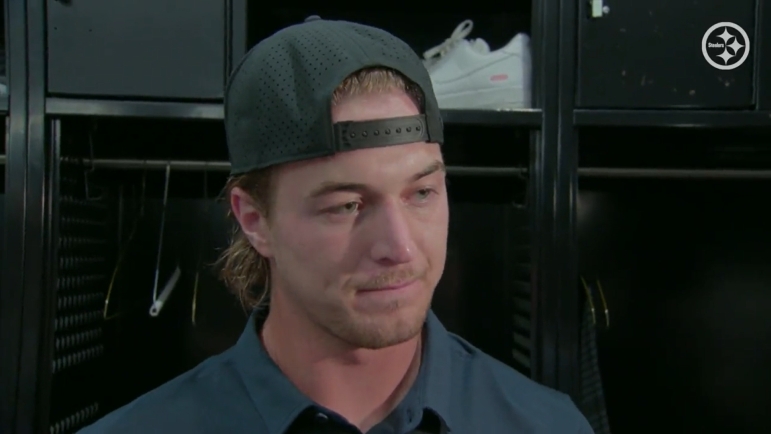 Pittsburgh Steelers rookie quarterback Kenny Pickett made the most of his opportunity on Saturday night in the team’s 16-15 win over the Jacksonville Jaguars, going 6-7 for 76 yards and a touchdown. Pickett talked about the touchdown drive and the preparation in practice that led to it with the media after the win (via a tweet from Steelers Live).

“Coach does a great job putting us in those situations, I’m really glad to have that experience in practice against our defense, I think it really helped and it showed out there, getting a live rep at it in a game,” Pickett said. “I think the gamer in me comes out in those moments, I like having the ball in my hand, and I think we have great players around me.”

There’s no doubt that Pickett looked really good tonight. While Mitch Trubisky was constantly under pressure, he didn’t move the ball and sustain drives as well as Pickett did. Even when he was facing a pass rush, he was still able to make big throws, including one to Pat Freiermuth down the seam with a rusher right on him.

Kenny Pickett anticipating and leading Pat Freiermuth with a free rusher right in his face…whew. Heck of a throw. #Steelers pic.twitter.com/o4hcSUnTU8

Pickett only played two series, but one of them was a scoring drive and the first drive ended after a 19-yard completion to Chase Claypool for a third-and-eight conversion became third-and-eighteen after a holding call against James Daniels. It was limited action, but he was really impressive when he was on the field.

It’s also good to hear that the two-minute drill that Pittsburgh runs in training camp helped Pickett out in a game situation. Being able to translate the skills learned in those situations to a game setting against a defense you don’t usually face is important, and Pickett was clearly able to do that. While Pittsburgh’s starting defense is more impressive talent-wise than Jacksonville, that elevated talent level clearly helped Pickett seamlessly make plays against the Jaguars.

It’s going to be interesting to see how things play out these next few weeks. With the way he’s played in the preseason coupled with his continued growth throughout training camp, I think Pickett might officially end up as the QB2 on the depth chart sooner rather than later. While Mason Rudolph has been playing well too, I don’t know if the Steelers can hold Pickett back if he’s showing that he can consistently play at the level he currently is.

I always believed this would more or less be a redshirt year for Pickett, but his level of play up to this point has been tough to ignore. He clearly has that gamer mentality he talked about, which we saw last week with the game-winning drive and now this week leading a 63-yard touchdown drive in just 42 seconds. If he can continue to progress at the rate he has been, I wouldn’t be surprised to see Pickett take over as the starter earlier than expected.