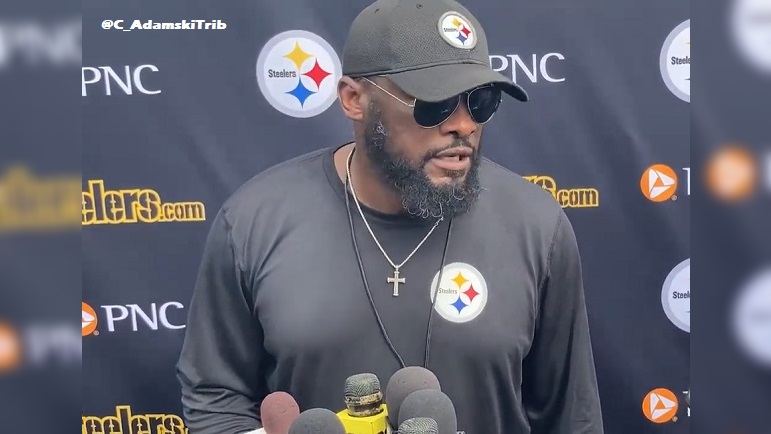 During his press conference after practice today, Steelers head coach Mike Tomlin said that he’s going to talk to the team about guys who were able to play themselves onto the roster in the last game of the season.

“I think it’s important that we always provide that perspective. That people charge through the barn doors in the 11th hour. You know, when we used to be in the four-game system it used to be the Carolina game historically. And guys like Arnold Harrison always ran their way onto the roster in the last game, and so I’ll give them those examples. And they’ll add to that legacy with their efforts,” Tomlin said via the Steelers’ YouTube channel.

There’s certainly an opportunity for guys to really step up and earn themselves a spot on the 53-man roster as Harrison was able to do back in 2007. With spots up for grabs at backup running back, backup outside linebacker, and along the offensive line, plenty of players have the opportunity to make their mark and show they belong on the final 53-man roster.

There could always be a surprise too, as the team has already made a surprise cut this offseason when outside linebacker Genard Avery was let go. There could be a player whose spot is not as secure as we might think, and someone can step up and take that spot away with a solid performance on Sunday.

With starters playing for at least a little bit on Sunday and with Detroit playing their starters for the entire first half, Sunday’s game will be a good measuring stick to see how Pittsburgh is able to stack up against the Lions. They finished 3-13-1, with that tie obviously coming against Pittsburgh in a game Ben Roethlisberger was out with COVID-19. Detroit should be better this year though, and I’m interested to see how Pittsburgh looks against them.

The game will also provide Pittsburgh’s first in-game look at a few players they brought aboard this week in OL Adrian Ealy and S Elijah Riley. With Pittsburgh’s offensive line seriously struggling, Ealy could be a guy who shows the staff something like that and potentially make the team as a backup. Riley’s most likely path to the 53 could come if Miles Killebrew opens the year on injured reserve, but if he performs well on Sunday, the team could always choose to take him ahead of Killebrew.

With plenty of guys having a lot to prove on Sunday, I’m interested to see who is able to step up and show they deserve to make the team. The preseason finale doesn’t usually provide a ton of drama, but with only three preseason games, this might be Pittsburgh’s most opener yet. I’m excited to watch what happens.