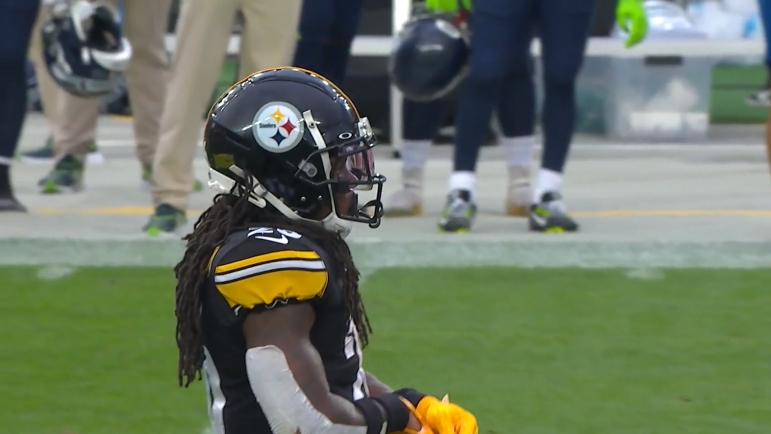 The Pittsburgh Steelers have what may be an increasingly open competition at running back this offseason, at least as it concerns the backup positions behind Najee Harris. Fourth-year Benny Snell Jr. may still have the inside track to a roster spot, but others are gaining ground and making it a conversation.

Anthony McFarland Jr. is another incumbent but is fighting for a roster spot as well, and he provided a strong opening statement for himself in the team’s Saturday night preseason debut, rushing for 56 yards and just seven carries, including a 24-yard run, the only explosive run by a running back on the night (wide receiver Steven Sims had a 38-yard run as well).

“Ant’s working really hard”, second-year offensive lineman Kendrick Green told reporters before practice earlier today, via the team’s website. “He popped off a few runs. I think the thing that I’ve seen from him between this year and last year is a little bit more detail when he’s running the ball, and a little bit better vision, so I like Ant a lot right now”.

A fourth-round draft pick out of Maryland in 2020, McFarland struggled to find opportunities for participation during his rookie season in 2020 playing behind James Conner and Snell. Any anticipated growth last season was stymied by an injury that forced him to begin the year on the Reserve/Injured List, where he spent the first month and a half of the season.

By the time he was activated to the 53-man roster in late October, Harris, then a rookie, had already established himself as the one true bellcow back in the league, dominating timeshare percentage of all running backs in the NFL.

That left little room for anybody else to get on the field, the rest of the team’s running backs combining for just 51 carries, which I’m just going to go out on a limb and guess is the fewest carries by backup running backs on any team in the league last year.

Moreover, McFarland was most often a healthy scratch upon his return, the team having decided to carry four running backs that season—in addition to Snell, veteran Kalen Ballage was also retained, but is no longer on the roster.

This offseason, Snell and McFarland are by now competing with a trio of intriguing rookie college free agents, the most notable of the group thus far proving to be Jaylen Warren, who scored on a reception from Kenny Pickett in the preseason opener and recorded 30-plus yards both rushing and receiving.

In addition to Warren, Mataeo Durant and the more recently signed Master Teague III have gotten onto the field and still have some time to make an argument for themselves. Still, McFarland ultimately possesses the most unique trait in the Steelers’ running back room, which is his speed and quickness. Provided that he can demonstrate the ability to make good use of that while carrying out the full functions necessary for a running back in Pittsburgh’s offense, he should have a somewhat safe path to a roster spot.