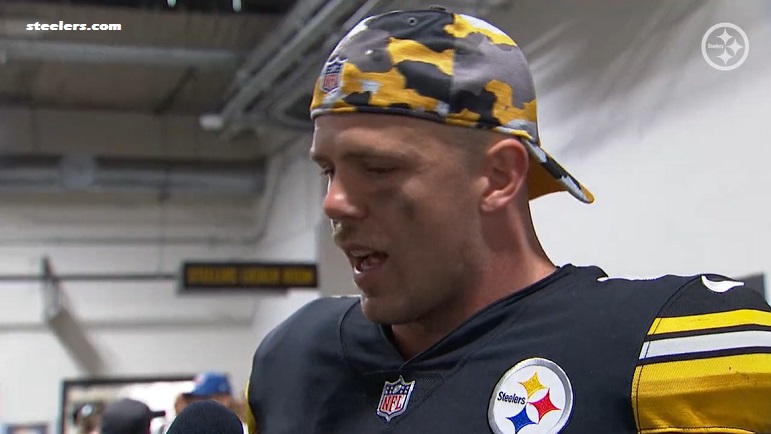 Robert Spillane is fighting for a starting job on the Steelers right now, and he had three tackles in Saturday night’s win over the Seahawks. After the game, Spillane talked to Missi Matthews via Steelers Live on Twitter about the team’s defensive effort on Saturday.

“I just love how we came together. We made a big play there at the end to secure victory and you know, lot to clean up, as it should be the first preseason game. But we got a group of guys who are willing to do whatever it takes to get things ready. So we’ll be going in the right direction,” Spillane said.

Pittsburgh’s defense certainly did make a big play, as with the Seahawks in plus territory after Pickett took a sack on 4th and 1, linebacker Mark Robinson came in as a free rusher and strip-sacked Seahawks quarterback Mark Robinson, and linebacker Tuzar Skipper recovered the fumble. The turnover set up the game-winning drive, where Pickett found Vaughns with three seconds left for a touchdown.

Pittsburgh’s defense had its share of mistakes and issues, especially in the run game. But just like they did so often last year, they showed up when it mattered the most to make a big play and help lead the Steelers to a win. There’s still a lot to build and improve on, but Spillane knows this defense well and he knows they’ll do everything they can to clean things up and get ready for when things really start to matter.

The run defense issues were a bit concerning last night given how poorly Pittsburgh defended the run last year, but it was a lot of lower-string guys playing when the defense really got gashed for big runs. There were some miscues by some starters and key backups for sure, but it wasn’t as noticeable as it was in the third and fourth quarters. Regardless, the team still banded together and made a key play to set up the win.

In the end, preseason is all about developing, but being able to make a play like Robinson and the rest of the defense made to help secure the win has to be a momentum boost and a huge confidence boost for that squad. Knowing how big that play was in the outcome has to make them feel good and keep them motivated going forward. Hopefully, the issues get cleaned up sooner rather than later, but the defense really did come through in a big way to help Pickett and the offense shine. We’ll see if they build off that momentum and look better next Saturday against the Jaguars.