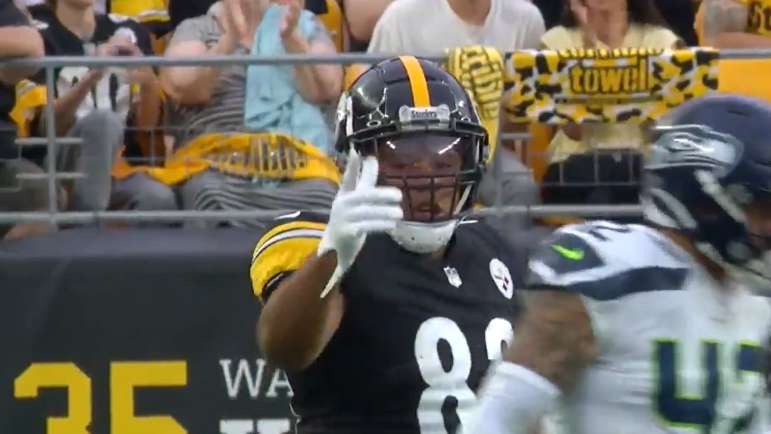 He’s been rather hard on him since he joined the Pittsburgh Steelers as a sixth-round pick in the 2022 NFL Draft out of Michigan State, but there was a sense of pride and joy watching younger brother Connor Heyward have a strong NFL debut in the black and gold against the Seattle Seahawks at Acrisure Stadium August 13 for Steelers star and team captain Cameron Heyward.

Speaking on the latest episode of his podcast, “Not Just Football with Cam Heyward” as part of ESPN’s Omaha Productions, Heyward wore two different hats when discussing his younger brother. Of course, Heyward put on the coaching hat and critiqued his brother’s performance — which included two catches fro 24 yards, one false start penalty and two tackles on special teams — but he also put on the brother hat and stated how proud he was to see his brother play well in his NFL debut.

All offseason the talk surrounding the two was about being brothers on the same team for the first time and really getting a chance to play together. Now that it finally happened (even though Cam didn’t suit up for the preseason opener), the older brother couldn’t help but feel proud, and was even a bit of a nervous wreck early on.

“Connor’s got some work on him. As a big brother, man, I couldn’t be prouder for that dude,” Heyward said regarding his younger brother’s debut, according to video via the NFL on ESPN YouTube page. “It’s one thing to just go to a team and be the sixth-round pick and have your dad play in the same city or same city in college, but you know, being his big brother being on the same team, I understand there’s pressure there, but I thought he handled it well. He did have a false start and I gave him a little bit of crap for it, but that’s something he’s gotta improve on…I thought he had a pretty good game, but that’s behind us and we gotta keep it moving.”

Cam Heyward had arguably the best seat in the house to watch his younger brother’s NFL debut, and even had a chance to heckle him a bit for the false start penalty. That experience up close and personal was a bit different for Heyward, who was used to watching Connor on TV in his Michigan State games, or from the stands when he had an opportunity in the schedule to sneak away for a game.

Saturday night at Acrisure Stadium though, Heyward was right there on the sideline as a team leader and, most importantly, teammate of Connor’s. That brought some nerves and excitement overall for the veteran defensive lineman.

“Yeah, I felt like I did because I wasn’t just worried about what I was doing on the field. I had an up close and personal look,” Heyward added, according to video via the NFL on ESPN YouTube page. “He was locked in and I’m just watching, I’m like, ‘oh, shoot.’ I remember watching his Michigan State games and being like, ‘Okay, he’s got to ball out today,’ but like this dude’s gotta ball out because he is on my team.

“So, it means that much more, but I was definitely nervous and I know my mom was in the box watching and I’m just like, ‘I know she’s even 10 times more nervous,'” Heyward added. “It’s really cool to see. Who would’ve thought…I can’t believe we ended up on the same team, but now we gotta stay on the same team and he’s gotta ball out and I gotta ball out.”

It is really cool to see, and it is probably very nerve-racking for Charlotte Heyward-Wesley, Cam and Connor’s mom. Hopefully the Heyward duo remains in Pittsburgh for a long, long time, continuing to produce at a high level, helping the black and gold win a ton of games.

One thing that would be even sweeter for Cam Heyward to experience, besides watching his brother from the sideline, would be passing the Lombardi Trophy to him before his career is over.