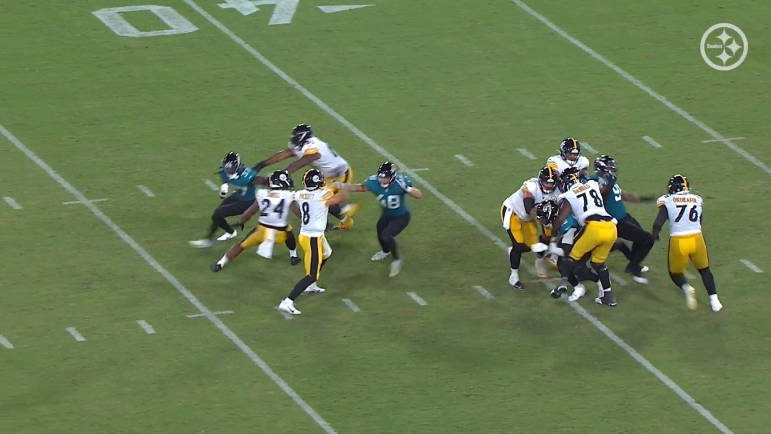 The mixed feelings that many Pittsburgh Steelers fans felt when the team drafted quarterback Kenny Pickett in the first round back in April have become decidedly less mixed over the course of the month of August—especially following the past two preseason games.

“I’m a proponent of playing the best guy”, he said on 93.7 The Fan yesterday on the PM Team program. “I don’t care how old he is. I don’t care if he’s a rookie or 100. I play the best guy, because the guy who’s the most talented is gonna give you the best chance to win football games, ultimately”.

Asked if he bought into the idea that playing a rookie behind a bad offensive line could set him back, and potentially even ruin his career, he seemed strongly against the notion that that had much if any validity. Perhaps quarterbacks like David Carr and Tim Couch just weren’t very good.

“I think you’re either good or not, you can handle the pressure or not”, he said. “I mean, look at Joe Burrow. Joe Burrow got killed his first year, and it wasn’t much better last year and he took the team to the Super Bowl”.

He also cited Troy Aikman, who took a beating early in his career yet went on to become a Hall of Famer. “I don’t buy that because you get hit a bunch, that hampers you from being the player you were ultimately gonna be, one way or another”, he said. And he believes Pickett can handle pressure.

“If you just look at some of the throws he made, especially in that two-minute drive when he was constantly under pressure, he was getting hit, and he had the courage, a lot of courage, to stand in there and deliver the ball on time and accurate”, Boselli said of the rookie’s preseason performance.

Ultimately, he said that if he were Steelers head coach Mike Tomlin, he would start Pickett at the beginning of the season, simply on the basis that he is the best quarterback out of the group that the Steelers have.

He did note that Pittsburgh having an above-average defense would help keep them in games that they might not otherwise be with the deficiencies that they have along the offensive line, which is a point not to be dismissed, either.

Pending, of course, the results of the preseason finale, should the Steelers start Pickett if he outperforms Mitch Trubisky and Mason Rudolph? If they believe that he is a starting-quality quarterback at that point, what are they risking by playing him now rather than waiting a bit?