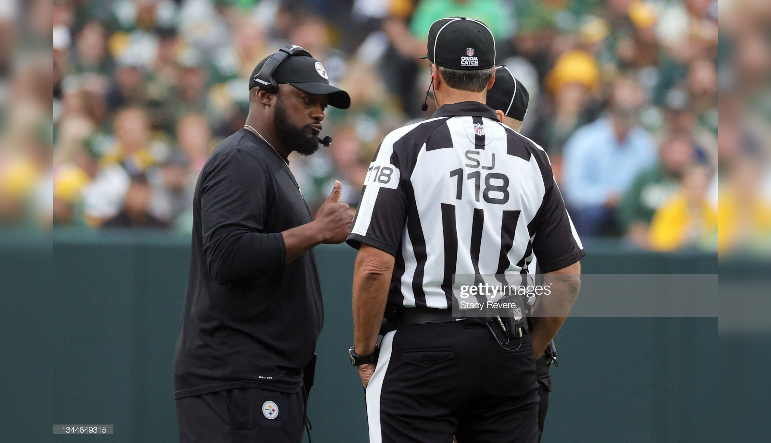 Taking in the third full day of padded practices at Saint Vincent College in Latrobe for Pittsburgh Steelers training camp, fans were treated to the presence of one of the most controversial groups of personnel on Chuck Noll Field Wednesday.

NFL officials were present for training camp practice Wednesday, calling penalties and providing a real, in-game atmosphere as the Steelers worked on two-minute situations and other aspects of game-like conditions.

Speaking with reporters Wednesday following practice, Mike Tomlin stated that having the officials present helps the players really understand some of the minutiae the goes into calls each week, including what officials look for, what’s allowed and what ultimately ends up being too far in situations, resulting in flags.

That’s certainly a unique way to look at things, but that’s who Tomlin is, especially with his role on the NFL’s competition committee.

“You get to learn the unwritten rules of the game. There’s the official rule book, and those are words on the page, but it’s no substitute for having these guys out here and getting the dialogue and getting their perspective on what the tipping points are,” Tomlin said to reporters following practice, according to video via Steelers.com. “We were having an OPI discussion, offensive pass interference, and extended elbow contact above the waist is a trigger for officials in terms of officiating that component of a play.

“So, they get to hear a little minutiae like that. That helps them play the game and play it at a professional level.”

That’s great perspective from Tomlin, and getting a chance to understand what the officials look for in situations like offensive pass interference, and more, will help the Steelers’ players better prepare and adjust early in training camp, hopefully avoiding calls against them, which should lead to cleaner games overall and less self-inflicted mistakes, which were an issue at times in 2021.

Of course, that all sounds well and good overall, but once the games start to count and players get into the heat of the moment, things like the minutiae of calls can be forgotten about, which can lead to some flags that players might not be happy about, especially in big moments. That was the case for the Steelers last season, especially defensively.

How they adjust to certain calls and trigger points this year will go a long way towards playing clean football and winning or losing.