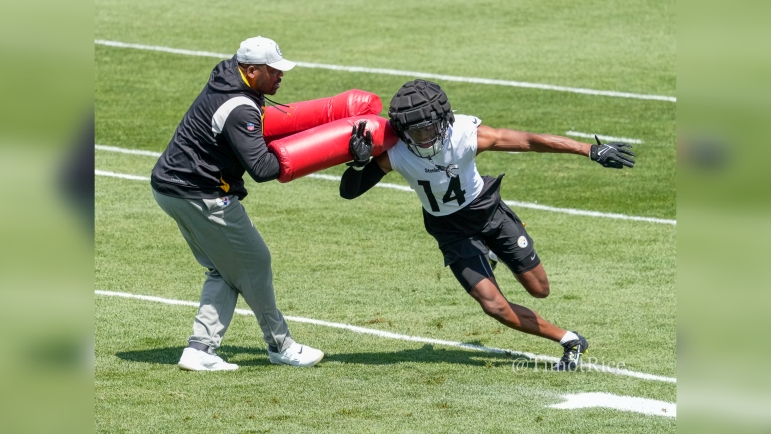 Pittsburgh Steelers second-round rookie wide receiver George Pickens has managed to do something every day of training camp to get himself noticed on the field in a positive way, leading many to make early projections about how much of the ‘real deal’ he is.

A standout out of Georgia, the 6’3” star was regarded as a prospect with first-round talent, but he fell into the second round due to health concerns, having suffered a torn ACL the year prior, which limited him to very little work during the 2021 season.

Most of what he achieved at the college level, however, can largely be attributed to sheer natural abilities, such as his size, his speed, his leaping ability. He came into training camp wanting to show that he is more than that.

“Just showing coaches I’m really a nice route runner”, he told reporters about what he set out to do this summer “That was my biggest thing, because everybody knows I’m big, fast. That was my—just a deep-ball type of guy. That’s what Randy Moss was. Randy Moss really never had the [shiftiness], and that’s kind of what I wanted to display”.

In the same interview, he talked about how he developed his game by modeling it after players who are smaller than he is, learning to ‘play small’ while still benefiting from his natural size and strength. He hopes to be the complete package as a wide receiver—really, as a football player in general.

With JuJu Smith-Schuster departed in free agency, Pickens has an ideal opportunity to seize upon a starting job immediately, in between Diontae Johnson and Chase Claypool. He probably has the strongest claim to it than anybody else on the roster, even amongst veterans such as Anthony Miller and Miles Boykin.

If he can show his ‘little’ traits while still making ‘big’ plays, it will be a hard task keeping him off the field, but the Steelers have no major aversions to playing wide receivers early. After all, Johnson and Claypool themselves both did the same, as did Smith-Schuster.

Because Johnson is currently not participating in team drills as he seeks a new contract extension, it has only afforded Pickens, and others, a greater opportunity to see better-quality practice reps, to state their case for a bigger role in the offense this season.

Nobody has taken greater advantage of that than has the Bulldog, whom Claypool said will be the best rookie wide receiver in the NFL this season. Given how rich the talent pool at the position is every year coming out of the draft, that’s no small task, and it will require competence from the quarterback position that is not guaranteed, but if he can do in stadiums what he’s doing on the practice field, he can claim that title. Maybe even Offensive Rookie of the Year. It’s not like a quarterback is going to win it this year.