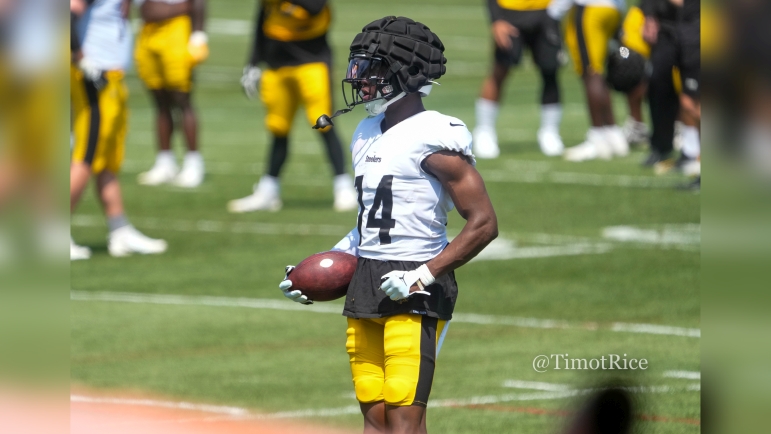 Finding a balance between confidence and humility can be tricky in life, and that’s amplified when talking about something like sports. An NFL player better have belief in what he does, but also enough wisdom to understand that you better bring some humility with you before you find it the hard way.

Pittsburgh Steelers rookie wide receiver George Pickens might be doing some talking in camp as he’s making impressive plays over the team’s defensive backs, but for him, it’s just the name of the game, of competing, of being at your best and doing what you have to do to win. It doesn’t come from a mean-spirited place, or at least doesn’t seem to.

In fact, you have to press him pretty hard to get him to even talk about his successes on the practice field. It took a couple of lines of questioning, for example, to get his opinion on whether or not he caught a second touchdown pass during Thursday’s goal-line work.

“My version is that I caught the ball. I feel like on that play they gave it to the defense, but I feel like I caught the ball”, he said on Training Camp Live. Head coach Mike Tomlin made the ruling and deemed him out of bounds—at a time when the offense was dominating the drill.

But he didn’t mind. Nor does he balk at the idea, as was suggested to him, that his coach might not want to pump him up too much, too fast. “Yeah, I kind of like it that way, because being humble is really the best way”, he said.

A second-round draft pick out of Georgia, Pickens has been garnering national attention within sports media for the plays he has been making at Saint Vincent College, being widely cited as one of the players to watch in training camp.

Fortunately for those who have not had the opportunity to attend, Pickens will be making his in-stadium debut on Saturday night versus the Seattle Seahawks, so he will have plenty more eyes on him. Not that the stage should be any issue for him, coming off of a national title run with a major Power 5 school.

By the looks of things, the rookie is on pace to being the regular season as a starting wide receiver alongside the newly-paid Diontae Johnson and Chase Claypool. His work on the practice field has indicated that he is ready for that, but he knows he has to keep proving it day in and day out, and in different ways. The latest test is to do it in a game, even if the score at the end doesn’t mean anything.