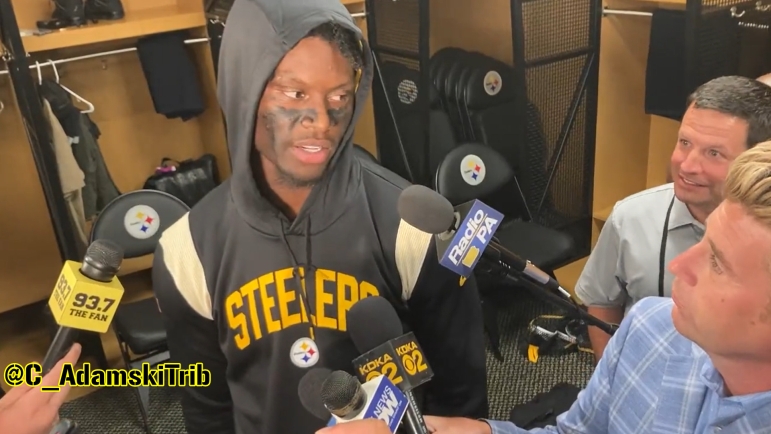 For most of training camp, we have been hearing the constant drumbeat of what rookie WR George Pickens was doing during practices and how players and coaches alike were complimenting him on his immense talent. Then videos started to leak from practices of Pickens making highlight reel catches daily against his teammates, showcasing impressive body control and natural hands to come down with the ball while contested.

All those practice reps came to fruition Saturday night as the Steelers beat the Seahawks 32-25 in their preseason opener at Acrisure Stadium. With 1:48 remaining in the first quarter, Mason Rudolph took the snap and threw up a beautiful deep ball down the right sideline as Pickens streaked down the field. He successfully located the football in the air and made the over-the-shoulder catch while tip toeing both of his feet in-bounds for the touchdown before falling out the back of the end zone. He made the catch over fellow rookie CB Coby Bryant.

When asked what it felt like to score his first career TD in the NFL after the game, Pickens took some time to recollect on the journey he has been on to this point, but recognizes that he still has a lot more work to do in his young NFL career.

“When you look at it, I feel like you look at it like a dream come true,” Pickens said in a postgame interview to the media via video from Pittsburgh Tribune’s Chris Adamski. “It’s like you are stuck in a dream, so I just already pay no mind. Just got to keep working.”

A little over a year ago from today, George Pickens was rehabbing from a torn ACL suffered during spring ball at the University of Georgia. Many wrote him off as having no chance to make it back for the season, but Pickens somehow pushed his way through recovery and got back onto the field for the Bulldogs’ National Championship Title run.

Pickens had to overcome a lot of adversity to just see the field for limited snaps in the CFP, let alone return to full health to perform the way he did at the NFL Combine and at his Pro Day to give Pittsburgh the confidence to select him #52nd overall in the 2022 NFL Draft. To be rewarded for all that hard work dating back to last season, it’s no wonder why Pickens said he felt like he was living in a dream, because in reality, this moment was likely a dream he had for himself dating back to when he was injured.

Still, while the world is on fire for Pickens and how much promise he has showcased in such a little timeframe, he is taking the humble route, stating that he just needs to keep working on his craft as he hasn’t “arrived’’ just yet. That is what Mike Tomlin has said on him at times during training camp, keeping the young man humble and hungry to capitalize on the great gifts he possesses.

We will have to wait and see what kind of Impact Pickens has during his rookie season, but if Saturday night is any indication, he seems primed for a big role early in 2022.