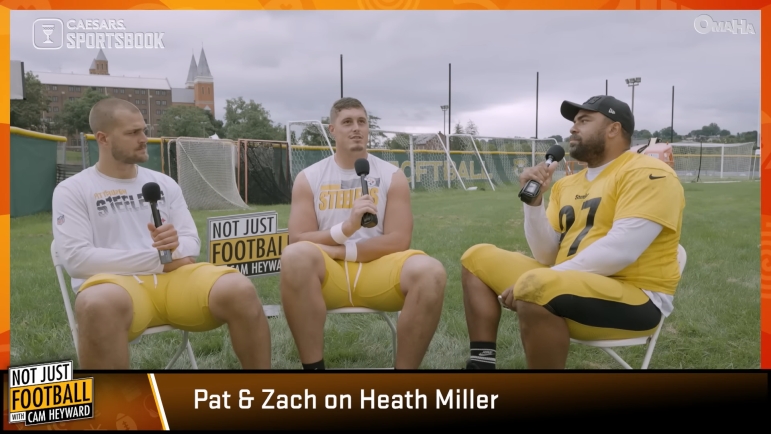 The Pittsburgh Steelers’ tight end room has lacked stability since the retirement of Heath Miller, by and large, at the end of the 2015 season, at least up to last year. Even though he’s been out of the locker room for going on seven seasons now, however, his presence continues to be felt—and not just because he’ll pop in from time to time.

With Pat Freiermuth and Zach Gentry emerging last season, the team may have found a healthy new nucleus for the tight end room that could rival Miller and Matt Spaeth. Miller was emblematic of the tight end position for a decade in the NFL, and his position coach, James Daniels, never let those who followed him come after forget it.

“You know JD used to have us watch so much Heath Miller”, Gentry told Cameron Heyward on his Not Just Football podcast. Gentry played two seasons under Daniels before he retired prior to the 2021 season, with Alfredo Roberts now in his second season in the role. “We watched a lot of Heath film when JD was here. We still throw it on every now and then, but we used to watch a ton of it back then. Dude was so special”, he said.

As for Freiermuth, the 2021 second-round draft pick, his relationship actually began before the Steelers drafted him. Miller was a mentor at the 2021 NFL Scouting Combine working with the tight end group, of which the Penn State product of course was a part.

The former great has popped his head in a handful of times since then. He was recently at training camp when the team announced him as a member of this year’s Hall of Honor class, and Freiermuth made sure to catch up with him.

“I think he just did everything so well at a high level that it’s kind of hard not to like, idolize his game, and work his stuff into your game”, he said.

A first-round draft pick in 2005, Miller was a part of the breakout Wild Card team that won the Super Bowl that year. A two-time Pro Bowler, he was the prototypical two-way tight end who could both catch and block at high levels of proficiency—setting the example for this current room.

“He just played at the correct speed. He knew where to be and when to be there according to the defense”, Gentry said, of what made Miller so great. “He never dropped a ball, it seemed like on film, ever. He just always found the open window. He was a great blocker. He really was a completely well-rounded tight end in every way”.

Roberts may not come directly from the coaching tree that produced Miller, but it’s impossible to escape his influence in any Steelers tight end room. And there’s no reason any of them would want to. He is the model for what they want to be—if not with just a bit more athleticism, perhaps.