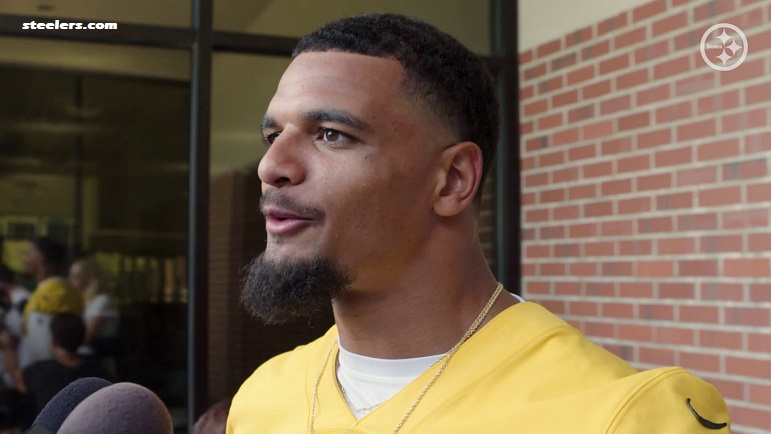 For the last three seasons, the starting duo of safeties Minkah Fitzpatrick and Terrell Edmunds has helped solidify the back half of the Pittsburgh Steelers’ defense under former defensive coordinator Keith Butler and new coordinator Teryl Austin.

Though the numbers might not always show it, the two work in tandem extremely well, moving all over the defensive formation to provide offenses with different looks, leading to some confusion that creates havoc.

That duo nearly came to an end this offseason though as Edmunds found himself on the open market much longer than expected before eventually returning to the Steelers on a one-year, $2.5 million deal — a significant bargain for the Steelers, especially next to the highest-paid safety in football in Fitzpatrick.

With a new contract in hand and his close friend and teammate back by his side for the 2022 season, Fitzpatrick is aiming for a big season ahead, which should come thanks to the freedom playing with Edmunds provides him as that ball-hawking safety in the secondary.

Speaking with reporters Monday prior to practice at Latrobe Memorial Stadium, Fitzpatrick spoke glowingly about how thankful he was to have Edmunds back next to him in 2022, according to video via Steelers.com.

“Yeah, I was excited [to get Edmunds back]. I was fighting hard to get TE [Edmunds] back, because when you’re a safety and you work the way that we work as partners, it’s tough starting over and having a new guy,” Fitzpatrick said to reporters Monday, according to video via Steelers.com. “So, you know, having him back there is big. He’s a smart guy, good guy, and a great player. So it’s definitely big for us to have him back there again.”

Having a starter back in the fold at such a significant discount, especially when that starter has more than 4,000 snaps under his belt in the Steelers’ scheme, is huge for the Steelers defense, which aims to carry the load in 2022 as the offense transitions into a new era without Ben Roethlisberger under center.

With Edmunds back in the black and gold for at least another season, that will allow Fitzpatrick to do what he does best defensively: float around, freelance at times and try to make plays on the football from the centerfield role. That’s his ideal fit, rather than supporting downhill against the run often like he did in 2021. With Fitzpatrick returning to his freelancing ways, the Steelers’ defense should see an uptick in turnovers forced in 2022. That’s a huge testament to the steadiness and reliability that Edmunds provides next to Fitzpatrick.

Austin, in his first year as defensive coordinator in the Steel City, though familiar with Fitzpatrick and Edmunds from his time as the secondary coach, will be leaning on guys like Fitzpatrick and Edmunds in the secondary to carry the load, move around, make plays and provide different looks, which should help the front seven win at a higher rate against the run and the pass, leading to a potentially dominant season defensively for the black and gold.