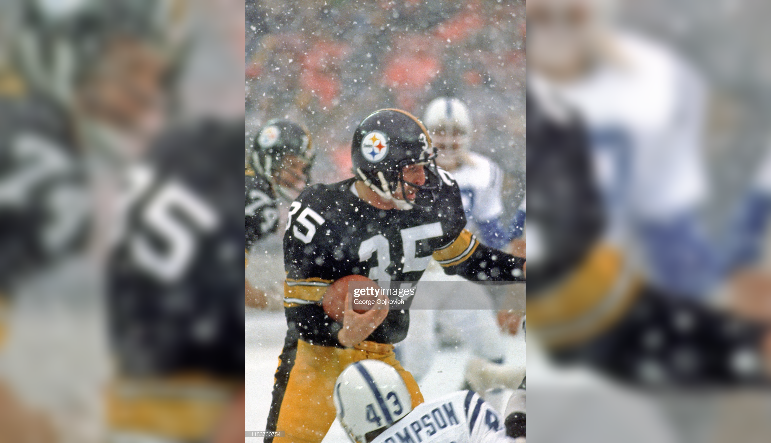 Former Pittsburgh Steelers running back and two-time Super Bowl champion Jack “Hydroplane” Deloplaine died at the age of 68 Wednesday, according to multiple reports.

A sixth-round draft pick out of Salem College (now University) in West Virginia in the 1976 NFL Draft and a Pottstown, PA native, Deloplaine spent four seasons with the black and gold, winning two Super Bowls in his time in the Steel City.

Nicknamed the “Hydroplane” for his ability to run the football in wet conditions, Deloplaine recorded 30 career carries for 147 yards and one touchdown in his time with the Steelers. He made his mark on special teams under Chuck Noll though, returning 18 punts for 157 yards and another 19 kickoffs for 422 yards, including 17 punt returns and 17 kick returns as a rookie in 1976.

“We are saddened by the news and send the best to his family and friends,” Salem’s Athletic Director Alexander Joseph said in a statement regarding Deloplaine’s death.

Obscure 70's player of the night: #Steelers RB Jack Deloplaine, shown here scoring a TD vs. the Giants in 1976. Deloplaine- a sixth round pick from tiny Salem College in WV, was nicknamed "the hydroplane" for his running prowess in wet conditions. He won two SB rings w PITT. pic.twitter.com/f3iSsZupUd

Following a breakout in the preseason in 1976, Deloplaine stuck around under Noll, but knee injuries eventually caught up to him in his career, which also included time with the Chicago Bears and Washington Redskins (now Commanders) before his retirement.

After his playing career in the NFL, Deloplaine was inducted into the Salem University Hall of Fame and is also the namesake for the university’s Jack Deloplaine Leadership Award, which is given annually to an athlete to represents his spirit and leadership, according to Salem University.

Seven years later, Deloplaine was named to the Pennsylvania Sports Hall of Fame in 1992.

No cause of death was announced, and no funeral arrangements have been made public.

#RIP former Steelers RB Jack Deloplaine, who passed away Monday. Here he is sharing his Super Bowl ring with my son @J_Myers304 and friend @GinoAquilino at the Wheeling Bluesfest a couple of years ago. Jack was a great guy — way too young to lose him. pic.twitter.com/MEYG4sBdWy