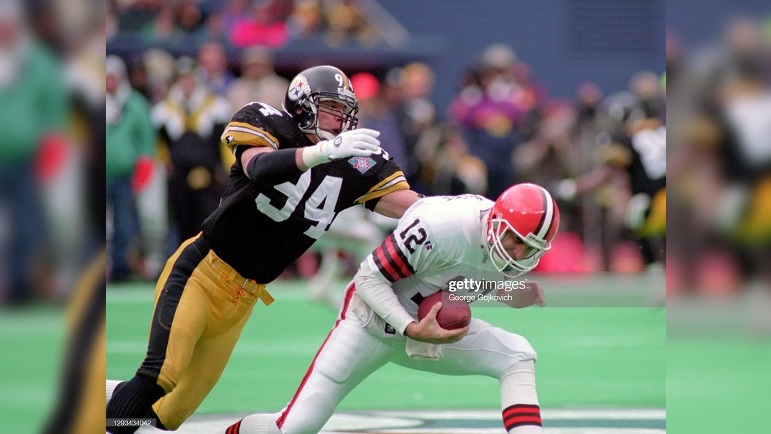 Perhaps the greatest recognition that any current Pittsburgh Steelers player can receive is from former players. Former Steelers linebacker Chad Brown, who started at middle linebacker in the Steelers’ 1996 Super Bowl against the Dallas Cowboys, went on 93.7 The Fan’s Cook & Joe Show to share his thoughts on Steelers outside linebacker T.J. Watt.

“I see a guy who is an absolute technician at it,” Brown said regarding Watt’s pass-rushing abilities. “You know, the evolution of being a pass rusher has changed quite a bit since I was in the league. You know, there were guys like Kevin Greene who had very set skill sets and kind of became a technician and had a textbook approach to it. But to watch T.J. Watt do it, to combine the incredible athleticism, size, flexibility he has with just really tremendous technique.”

A former Steelers’ second-round pick, Brown had two stints with the team in 1993-1996 and 2006. As such, he began his career playing the inside linebacker position. Due to an injury to Steelers outside linebacker Greg Lloyd, Brown switched positions to replace him and made three Pro bBowls in doing so. Brown played several seasons alongside Steelers Hall of Honor linebackers Kevin Greene and Greg Lloyd. All of this is to emphasize the significance of Brown’s praise for Watt, especially given that he played the same position in a different era and his description of Watt as a more athletic Kevin Greene.

The acclaim of being mentioned in the same breath as Lloyd and Greene cannot be understated. Lloyd earned the title of being the “baddest man in football” in an era of pass rushers that included the likes of linebacker Lawrence Taylor and defensive end Reggie White. A former sixth-round pick, Lloyd had himself a career that exceeded expectations, racking up 54.5 career sacks and several Pro Bowls for the black and gold. On the other hand, while Greene only played for the Steelers for two short seasons, he had a Hall-Of-Fame career and stated that he had the “time of his life” playing for the Steelers, also having his Hall of Fame ceremony at Heinz Field.

“It’s like, wow, that’s just a guy who has worked that particular move over and over and over,” Brown continued regarding Watt’s work ethic. “And is able to take advantage of almost any past blocking set that offensive lineman presents him with.”

Watt’s dedication to perfecting his craft contributed greatly to his becoming the nearly unstoppable pass-rusher that Steelers Nation knows and loves. That is, the “particular move” that Brown mentions is Watt’s rip move, which is his most used and most successful pass rushing move. Paired with his elite athleticism and drive, Watt turned himself into the highest-paid player on the Steelers.

In the 2017 NFL Draft, Watt slid to the Steelers at pick 30, as many teams were not sold on his value as a first-round selection. After winning Defensive Player of the Year in 2021, making several Pro Bowls, and nearly breaking the sack record, it’s fair to ask what teams were missing. Circling back to Brown’s comments, it’s clear that Watt’s work ethic ultimately set him apart from his peers.