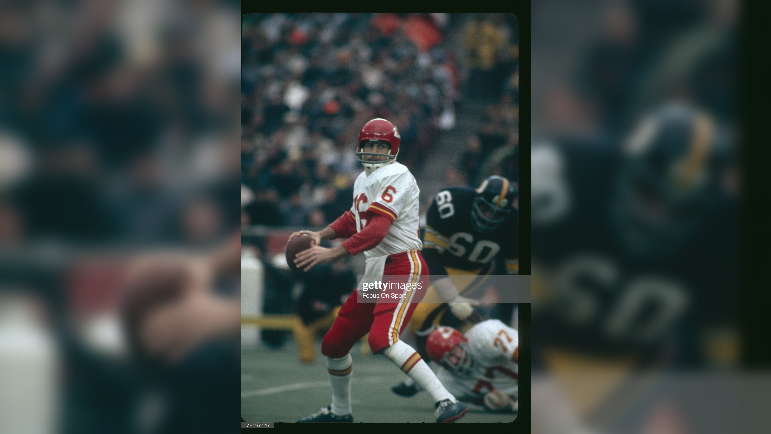 Hall of Fame quarterback Len Dawson, who was famously traded by the Pittsburgh Steelers to the Cleveland Browns, then cut by the Browns before landing with the Dallas Texans (now Kansas City Chiefs), died Wednesday at 87 years old, his family announced.

Hall-of-Fame QB and broadcaster Len Dawson has passed away, according to his family. He was 87. pic.twitter.com/Tk9yHZNTV2

Dawson, who was a three-sport star athlete at Alliance High School in Ohio (100 miles from Pittsburgh) before going on to star at Purdue University, was the Steelers’ first-round draft pick in the 1957 NFL Draft at No. 5 overall.

At Purdue, Dawson led the NCAA in passing efficiency as a sophomore while also playing defense and kicking, and helped lead an upset of Notre Dame during the 1954 season that put him and the Boilermakers on the map. By the end of his college career, Dawson had thrown for more than 3,000 yards, despite playing in an era that favored ground-and-pound football.

As a first-round pick for the Steelers, Dawson was viewed as the longtime starting quarterback the Steelers had been searching for early in the history of the franchise under the Rooneys. However, Dawson wound up riding the bench behind Earl Morrall as a rookie and then failed to beat out Bobby Layne for the starting job in 1958.

After the 1959 season, Dawson — who played in just 20 games for the Steelers with one start — was traded to the Cleveland Browns. There, Dawson failed to beat out Milt Plum for the starting job and was released after just nine games in two years with one start.

RIP Len Dawson. Here he is carving up the Steelers after the AFL-NFL merger. He could really play! pic.twitter.com/NcYratSInt

That led to Dawson landing with the then-Dallas Texans in the AFL with head coach Hank Stram. Once reunited with Stram, who coached Dawson at Purdue, the duo went on to achieve historic success, winning three championships together, including Super Bowl IV over the Minnesota Vikings in 1970. The duo also led the Chiefs to the first-ever Super Bowl in 1967 against the Green Bay Packers after the AFL-NFL merger.

Dawson was inducted into the Pro Football Hall of Fame in 1987 as a player and in 2012 as a broadcaster.