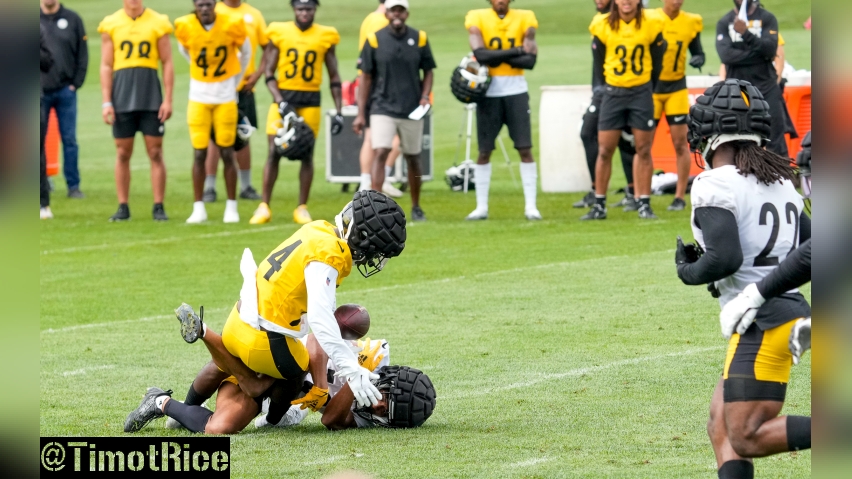 No one wanted to see Minkah Fitzpatrick begin training camp on NFI, placed there after suffering a freak bike accident while on vacation. Replacing him that first week of camp was veteran Damontae Kazee, and according to Terrell Edmunds, Kazee is more comfortable in the Steelers’ defense because of it. Edmunds spoke to reporters following Monday’s practice and was asked about Kazee’s play.

“Don’t take this the wrong way but I think with Minkah being out, that helped Kazee tremendously,” he said via Steelers Live on Twitter. “Just getting him the extra reps with the 1-defense. Really getting those extra reps, I think he finally now understands exactly what we want to do.”

Kazee ran exclusively as first-team free safety until Fitzpatrick returned in full. Kazee’s had a good camp, looking healthier now that he’s two years removed from a torn Achilles that cut short his 2020 season. He continues to play bigger than his size, something that was evident when he came out of San Diego State, and is capable of playing safety or slot corner, though his summer has been spent at the former.

“He went out there this past game week and he showed us exactly what he can do multiple times. He’s out there making plays and he’s a playmaker.”

Like the rest of the secondary, Kazee missed too many tackles. But he’s also an impactful hitter, dropping big tight end Evan Engram for a key fourth down stop in the first half. He threw his weight around in the opener against Seattle, filling the alley against the run and making open field stops.

With a good summer under his belt, the Steelers may be toying with ways to get him on the field to stop the run. They ran a “big nickel” packages three times against Jacksonville, a three-safety package with Kazee being one of those three. That isn’t brand new, they did it last season with Miles Killebrew, and is something they could continue to employ against one-receiver sets, 22 or 13 personnel. That’ll be especially useful against the AFC North versus a team like the Baltimore Ravens who regularly employs a fullback and/or multiple tight ends.

Kazee was one of the team’s latest additions, signed just hours after the NFL Draft wrapped up. He’s proven to be a quality add and gives Pittsburgh plenty of experience, depth, and options, something they didn’t have a year ago.