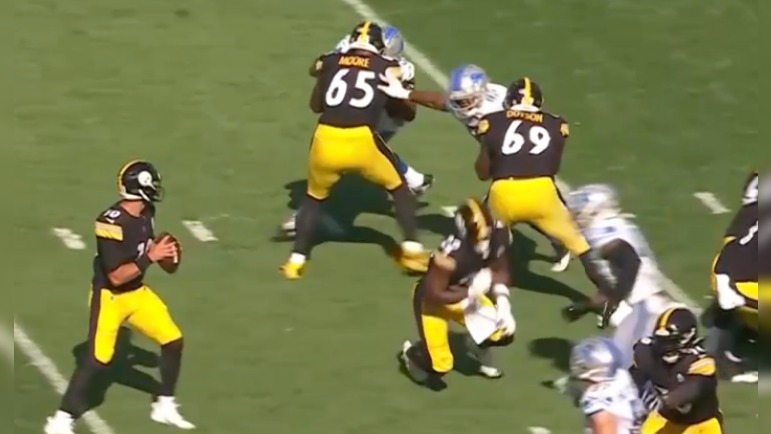 The Pittsburgh Steelers capped off the preseason with a 19-9 preseason win over the Detroit Lions Sunday evening, finishing a perfect 3-0 in exhibition play before the start of the regular season. The first team offense put together a better showing in this contest than in their previous matchup against the Jaguars, successfully moving the ball down the field into scoring range and managed to put the ball into the end zone before half time thanks to a well-executed two-minute offense.

As Alex Kozora mentioned on Twitter, the offensive line as a whole did much better this time out against the Lions than the previous week in their dreadful performance against the Jaguars. Mitch Trubisky was giving far more time in the pocket to find receivers down the field and make plays in the passing game which helped more the offense into scoring position several times.

Penalties still a problem. Dan Moore still had ugly reps. Hadn't looked at run blocking yet. But in terms of being comfortable with on/off-body pass sets and using independent hands, clear improvement.

Still, LT Dan Moore Jr. continued to deal with his struggles this preseason after a disastrous performance last weekend in Jacksonville. As Kozora mentioned above, was the culprit of two penalties early in the contest with the first coming on an outside run to the left where Moore yanks #97 Aidan Hutchinson by the collar after not being able to turn his outside shoulder away from the play, resulting in a holding call. The second holding call comes two plays later against #53 Charles Harris as the pass rusher gets a quick first step off the LOS, dipping and ripping around the corner as Moore resorts to dragging the defender down to avoid giving up the hit which results in the flag being thrown.

When Moore didn’t resort to committing a penalty to delay the rush, his performance yielded mixed results. On the third play for Pittsburgh as the offensive is trying to convert on third down, Moore gets beat by Harris who converts speed to power and forklifts Moore into the pocket and then chucks him to the side and finishes at Trubisky for the combined sack with Hutchinson, forcing Pittsburgh to punt.

While Moore had those hiccups early on in pass protection, he did display better consistency throughout the first half than in last week’s matchup. He showed to be more comfortable using independent hand punches in Sunday’s contest against the Lions and did a better job keeping the pass rusher away from his frame with outstretched hands. Here are a couple of reps against #40 Jarrad Davis and #53 Charles Harris where Moore lands an effective one-handed punch and keeps the defender at bey, avoiding the tendency to lunge forward and drop his head and stays in-phase through the entire pass set.

We also see Moore play under better control than before in his last outing, waiting for the defender to show his hand and then reacts. Here on this rep against Davis, Moore sees the LB try and go low with power but catches the pass rusher losing his balance. Moore capitalizes by snatching him and finishing on top of the defender on the ground, pancaking him as Trubisky gets the ball out to #82 Steven Sims in the flat.

Overall, it’s good to see that Dan Moore Jr. appears to be getting a better handle on OL Coach Pat Meyer’s teachings with another week of work out on the practice field as well as in the film room. You saw him execute the technique a lot better than in his first two outings, being able to play steadier and win with independent hands while keeping defenders off his frame. Still, the penalties and sack allowed on the bull rush dampen what could have been a rather positive performance from Moore in his preseason finale.

Moore has been the subject to criticism for most of the preseason, and rightfully so. His play appears to have taken a step back from where he was at the conclusion of the 2021 season. Part of that must be contributed to the new philosophy he and the rest of the OL are learning under Meyer which takes time and live reps to be able to adjust to. However, several of Moore’s notable issues including strength at defending the bull rush or the lack of synchronization of his hands and feet in his pass sets exceed the teachings of Meyer and are something that may likely continue to plague him throughout his NFL career.

Moore did play better overall in Sunday’s matchup, but the question remains if that performance will be good enough as Pittsburgh’s starting LT protecting the blindside of a new starting QB in 2022.

What are your thoughts on Dan Moore Jr. Do you think that his play improved against the Detroit Lions? Will he improve enough to be serviceable as Pittsburgh’s starting LT in 2022? Please leave your thoughts in the comments section below and thanks again for reading!