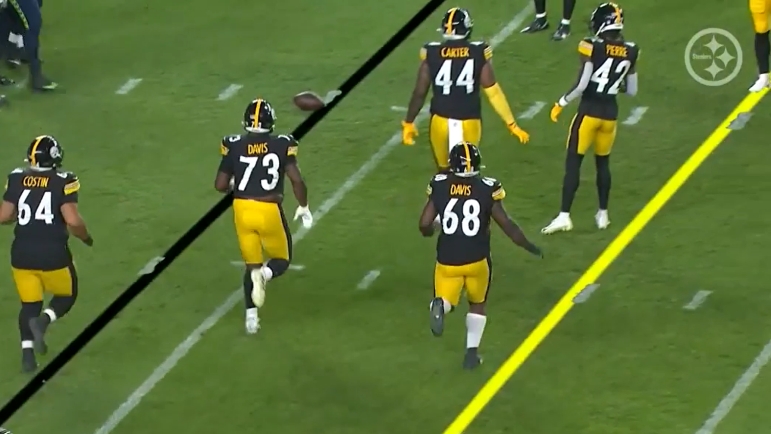 Now that the Pittsburgh Steelers have assembled an initial 53-man roster, which involved releasing or waiving 29 players in order to get down to 51 (to accommodate two trade acquisitions), the next process begins, and a major component of that is assembling a practice squad.

Practice squads can be assembled with both inexperienced and veteran players, though of the latter, there is only a limited amount permitted (eight, I believe). History tells us that at least a couple of players signed to the initial practice squad will come from other rosters, but I figured we should take a look at some of the likely candidates whom the Steelers have recently cut who may yet circle back.

QB Chris Oladokun: Though he was included in the second wave of roster cuts, the Steelers could still consider adding him to the practice squad, if he is willing to sign (he reportedly has a visit lined up with another team). This would be especially significant if they are entertaining the possibility of trading Mason Rudolph.

TE Kevin Rader: Rader is a practice squad veteran at this point, and were it not for Connor Heyward being drafted, he probably makes the 53 this year. A plus special-teamer, he still has value.

RB Anthony McFarland Jr.: A 2020 fourth-round pick, McFarland lost out to rookie undrafted free agent Jaylen Warren for a roster spot this year. But he still had a solid offseason, the best yet of his career, and if he clears waivers, I strongly suspect he will be back.

WRs Tyler Vaughns and Cody White: Both of them were on the practice squad last year. Vaughns was only added after final cuts, but this year, he got a chance to impress in camp and the preseason. White was on the 53 for most of last year after JuJu Smith-Schuster’s injury.

OL John Leglue, Joe Haeg, Trent Scott, Chaz Green: It would be a bit of a surprise if Haeg ends up going without finding another opportunity on a 53-man roster, of course, and Scott could easily be re-signed in the near future. Leglue feels a sure bet to return to the practice squad. Green spent time there last year, as well.

DL Carlos and Khalil Davis, Henry Mondeaux, Donovan Jeter: Khalil Davis was on the practice squad last year for much of the season, after the team initially attempted to claim him off waivers. Carlos Davis and Mondeaux were both on the 53 for most of last year, though the former spent time on IR. They were crowded out of a room that featured the additions over the past calendar year of Montravius Adams, Larry Ogunjobi, and DeMarvin Leal. Jeter is a rookie college free agent nose tackle who did some decent things late in games.

ILB Buddy Johnson: A second-year fourth-round draft pick, Johnson did not take a significant step forward this year and thus lost out to rookie Mark Robinson, but he has shown enough to stick around on the practice squad and continue to develop.

OLBs Hamilcar Rashed Jr., Ron’Dell Carter, Delontae Scott, James Vaughters: Of the quartet, Rashed seems the most likely to be retained. He probably would be on the 53-man roster right now if the Steelers didn’t trade for Malik Reed.

CBs Justin Layne and Chris Steele: A 2019 third-round pick who never developed sufficiently, but who has made a living on special teams, and a rookie college free agent who showed some promise. With only 10 total defensive backs on the 53-man roster, it would be wise to stock up on the practice squad.

Ss Elijah Riley and Linden Stephens: Many thought that Riley might make the 53-man roster despite being claimed off waivers just a week ago. He could get a chance to continue to learn the system on the practice squad. Stephens spent time there last year and didn’t have a bad camp.

Some other players who were lost to injury may at some point manage to get healthy again and find their way to the practice squad, particularly Carlins Platel and Donovan Stiner, the latter of whom was on there last year. The former is a versatile rookie college free agent who had a good preseason and camp, overall. Although there currently are no meaningful COVID-19 protocols in place, with the expanded practice squad, they could also still consider carrying an extra specialist—particularly an extra punter, given that Pressley Harvin III still has much to prove.