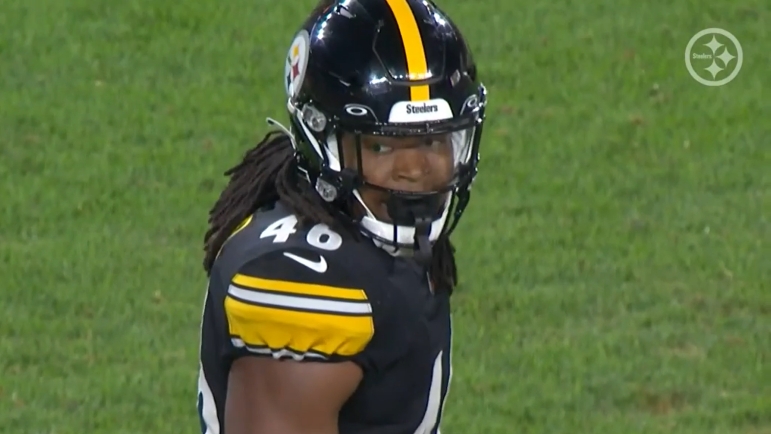 Veteran outside linebacker Genard Avery was the most surprising cut the Pittsburgh Steelers made Tuesday as they trimmed their roster from 85 to 80. Until that point, Avery had run as the #3 outside linebacker, starting in place of the injured Alex Highsmith all week and during Saturday’s preseason win over Jacksonville, a game in which Avery finished with three pressures. By Tuesday, he was off the Steelers’ roster. That’s the NFL for you.

The team’s next man up appears to be Hamilcar Rashed Jr., who reportedly has been working as first-team ROLB throughout the week. According to the PPG’s Gerry Dulac, the Steelers plan to take a long look at him this weekend against Detroit while keeping an eye on the waiver wire after final cutdowns. Here’s what Dulac tweeted a short time ago.

Steelers cut OLB Genard Avery because they didnt think he was a fit for their defense, nothing more. Will start and look at Hamilcar Rashed (#46) against the Lions, but OLB pickup after cuts still in play.

Dulac doesn’t go into much detail as to why Avery wasn’t a fit. Perhaps he played too out of control for the Steelers’ system, giving up contain in Saturday’s win over Jacksonville and allowing quarterbacks to leave the pocket. Speaking with reporters earlier today, Mike Tomlin confirmed it was purely a football decision. Avery’s already caught on with a new team, signing with Tampa Bay Wednesday.

Rashed Jr. is a recent addition, signed to the roster on August 10th, and he now has a chance to make the Week 1 roster. That wouldn’t be without precedent. In recent years, names like OT Zach Banner (August 12th, 2018) and WR Ray-Ray McCloud (August 21st, 2020) made the club after being mid/late training camp additions.

Shortly after Rashed Jr. signed with the team, Tomlin was asked for a quick scouting report.

“I remember when he came out in the draft, he was a guy that had our attention,” Tomlin said the following day. “He’s an outside linebacker body type. I think he had 14 sacks his junior year at Oregon State, and that captured our attention. But it’s a get-to-know process and we’ll be excited about giving him an opportunity to show himself to us. He’s a guy that’s not a rookie. He’s been in this thing so I’m hopeful that he can learn fast enough to be a contributor in some form of fashion, Saturday.”

As Tomlin referenced, Rashed Jr. had an incredible junior season, putting up 22.5 tackles for loss and 14 sacks. Things went south his senior season, dealing with an injury, and he failed to register a sack in seven games. Couple that with an ugly-looking three-cone time of 7.51, and he went undrafted in 2021. He was picked up by the New York Jets and carried until this summer, when New York waived him on August 8th. Now, he’ll have a chance to make the team in Pittsburgh. Through two games with the Steelers, Rashed Jr. has two pressures, one in each contest, and recorded a sack against Seattle.

Also competing for that #3 spot is Derrek Tuszka while guys like Delontae Scott, Ron’Dell Carter, and James Vaughters are battling to stick on the practice squad. This Sunday’s finale against Detroit has meaning for spots big and small on the roster, everything from the starting quarterback to one of the backup outside linebacker spots. If Rashed Jr. can play well, he can lock up a roster spot. If not, the Steelers may add an outsider. Perhaps last year’s sixth-round selection Quincy Roche, reportedly on the bubble in New York, could circle back.