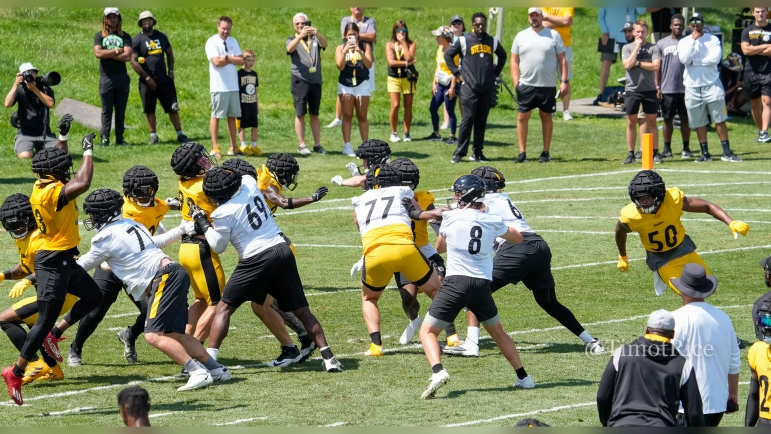 The Pittsburgh Steelers may be down to just one legitimate competition for a starting job on offense at this point, specifically at left guard, where incumbent Kevin Dotson is hoping to hold off second-year challenger Kendrick Green, who is moving over from starting at center.

The two started nine games side by side last season before Dotson went down with a significant ankle injury that knocked him out for the remainder of the year. Now they’re splitting reps at one spot. But they’re both ready to go up against some different defensive linemen in tomorrow’s preseason opener.

“It’s like fighting your little brother or playing basketball against your little or big brother”, he said, via The Fan, about constantly working in practice against the Steelers’ defenders. “Somebody who’s seen your moves forever and they know how to counter it. They’ve been going against you for two-three years now, so they know what type of person you are. It can get kind of tedious”.

Dotson’s left guard spot means that he sees plenty of Cameron Heyward, for example, who hasn’t been shy about acknowledging that he likes to test people and push their buttons. He said on the most recent episode of his podcast that even for as veteran as he is, he still wants to win every drill, and if you beat him in one drill, he wants to destroy you in the next.

Going up against the Seattle Seahawks’ defensive front might even be a break for this offensive line. After all, the Steelers have one of the top defensive lines in all of football, including two first-team All-Pros and the reigning Defensive Player of the Year. Chukwuma Okorafor in particular probably can’t wait to get into a game just so he can get away from T.J. Watt.

The preseason is an important milestone in the NFL calendar in general, because it marks the beginning of competitive play. No matter how competitive you are in practice, it’s not like going up against an opposing team. Even joint practices don’t replicate the in-game experience, either, especially since teams are going to be extra careful about avoiding injury in inter-squad drills.

We saw our first actual NFL games of the season last night, which included the Baltimore Ravens winning their 21st consecutive preseason game, for whatever that’s worth. But tomorrow night, we get to see our own Steelers inside of a stadium for the first time since January. And it’s a very different-looking Steelers team as well, so there should be a lot to learn from.