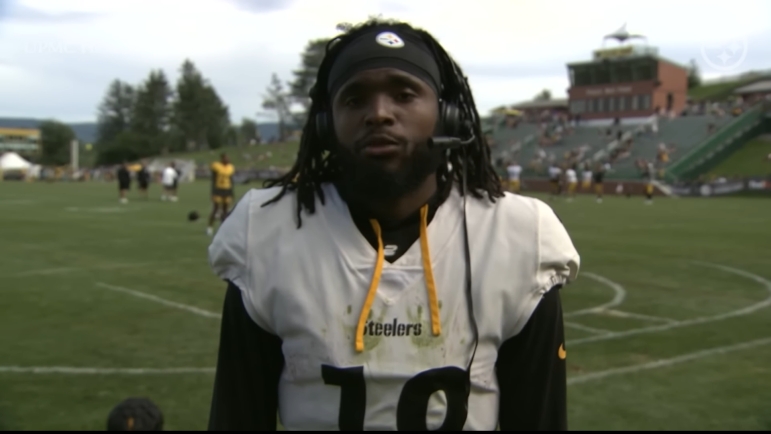 The Pittsburgh Steelers offense during the first preseason game was without most of its…well, most of its offense. Missing their top two wide receivers, top two running backs, and top two tight ends, they still put up 32 points, including four touchdown drives.

But there was clearly talent missing in action, chief amongst the missing being perhaps fourth-year wide receiver Diontae Johnson. Though he likely wouldn’t have played anyway, or much, he was sidelined with a minor hip flexor injury that is now behind him.

“It’s amazing. It’s back healthy”, he told Missi Matthews speaking after practice yesterday as part of the team’s Training Camp Wrap Up coverage. “I’m back running around feeling like myself. I’m making plays like the usual and I’m just gonna continue to show that”.

Johnson hasn’t had a ton of participation in training camp as far as team drills go. He sat out nearly all but individual work in the early portions of camp as he and his agent were working out a new contract extension. After the dotted line was signed, he was out there full-go, but then the hip injury briefly put him back to spectator status.

That won’t last. He’s already back practicing in full, of course, and he told 93.7 The Fan on Monday that he anticipates playing. “I’m sure Coach [Tomlin] is gonna have me play a little bit this week. Whether that’s this week or next week, I’m gonna be ready, just to get my feet back wet getting ready for September 11”.

In case you didn’t know, or couldn’t guess, that’s the date of the Steelers’ regular season opener against the Cincinnati Bengals, at whatever the hell their stadium is called now. Not that a home game would have presented us with a better stadium name. But I digress…

Johnson is coming off of a career year, catching 107 passes last year for 1,161 yards and eight touchdowns, each number a career high. Although he was not voted into the Pro Bowl outright, he did make it as an alternate.

A couple weeks back, the veteran receiver signed a two-year contract extension worth $36.71 million in new money, with an effective APY of over $18 million. The deal included a signing bonus of $17.5 million. Along with a $1.5 million base salary for 2022, that is $19 million fully guaranteed at signing.

With him under contract, the Steelers will have himself, Chase Claypool, and rookies George Pickens and Calvin Austin III for at least the next two seasons, barring health, performance, or trade circumstances that decide otherwise. Johnson will be an integral part of the transition of the offense from Ben Roethlisberger to Kenny Pickett, whether that goes through Mitch Trubisky first or not.