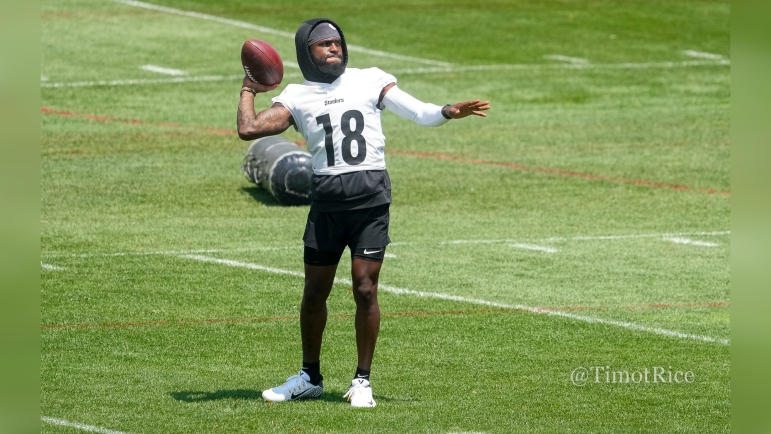 The period of transition for the Pittsburgh Steelers couldn’t have come at a worse time for standout wide receiver Diontae Johnson.

Coming off of a career year in which he hauled in 107 passes for 1,161 yards and eight touchdowns, Johnson finds himself entering a contract year in 2022 with a new front office regime in the Steel City led by new GM Omar Khan, along with a pair of new quarterbacks in veteran Mitch Trubisky and rookie first-round pick Kenny Pickett.

After three straight strong seasons of borderline WR1 play with Ben Roethlisberger under center, Johnson put himself in a position to receive a relatively large contract extension in Pittsburgh. That hasn’t happened yet, though it certainly could before the Steelers kick off against the Cincinnati Bengals on Sept. 11 to open the season on the road.

While both sides would love to get a deal done that is fair for both, chances are that’s becoming more and more of a stretch, especially with the exploding wide receiver market in the NFL, Johnson is currently conducting a “hold-in” at training camp, which in turn is allowing young receivers like George Pickens and Calvin Austin III to show off their skills, which could hinder Johnson’s ability to land an extension.

This is one of Diontae Johnson's best plays of his career. The route, the separation, tracking the football, playing through contact, getting a foot and knee inbounds to complete the catch. Elite moment. #Steelers pic.twitter.com/LmjQoc5Q2W

Along with the contract negotiations and tactics, Johnson will have to adjust to Trubisky and Pickett, along with Mason Rudolph, depending on which of the three wins the three-way quarterback competition in training camp at Saint Vincent College in Latrobe. With Roethlisberger, Johnson was very clearly the top target, recording targets of 169 and 144 in the last two seasons, numbers that were up there in the top 10 consistently in the NFL.

Those targets might drop dramatically in a contract year for Johnson without Roethlisberger under center. That’s in large part why Pro Football Focus’s Doug Kyed labeled Johnson as the Steelers player with the “most to prove” in 2022.

“Johnson very well could enter the 2022 season without the new contract extension he seeks,” Kyed writes regarding Johnson. “One source believes he might wind up cashing in as a free agent next March. If he performs well, he’ll likely exceed $20 million per year on the open market.”

Whew, this route by Diontae Johnson. Sell vertical, break down, runs the cornerback off. Becoming one of the league's better route runners. #Steelers pic.twitter.com/jmzM3Fthpr

There is certainly a good chance that Johnson and the Steelers don’t come to terms on an extension, putting the spotlight on the fourth-year receiver in the 2022 season to perform up to standard to land that large deal in free agency he’s seeking. That said, there’s not much to truly “prove” for Johnson on the field.

Three seasons into his career it’s well known that Johnson is an elite level route runner, one that creates a ton of separation from even the best defensive backs on a weekly basis. He’s incredibly difficult to handle one-on-one, is crisp in and out of his breaks, and routinely finds himself open for his quarterback to target him with the football.

The only real knocks on Johnson’s game are the focus drops issues, and his lack of explosion after the catch as he’s not really keen to mix it up with defenders from a contact standpoint. Those two issues in his game shouldn’t really be a concern to the Steelers overall. Johnson had a really rough 2020 season with drops, but bounced back in a major way in 2021 after putting in a ton of work. He had just five drops on the career-high 169 targets in 2021, good for a career-low drop percentage of 3.0%.

Still, detractors want to consistently jump to the inconsistent hands aspect time and time again to try and put down Johnson’s abilities. It’s completely ignoring factual numbers and relies heavily on the drops issues in 2020, which were undoubtedly awful. He seems past that though, for the most part.

He’s a legitimate No. 1-caliber wide receiver in the NFL, and really doesn’t have much to prove, so it’s a bit of a surprise that PFF labeled Johnson as that player for the Steelers, largely due to a contract situation. The correct choice might have been Devin Bush or Ahkello Witherspoon, quite honestly.