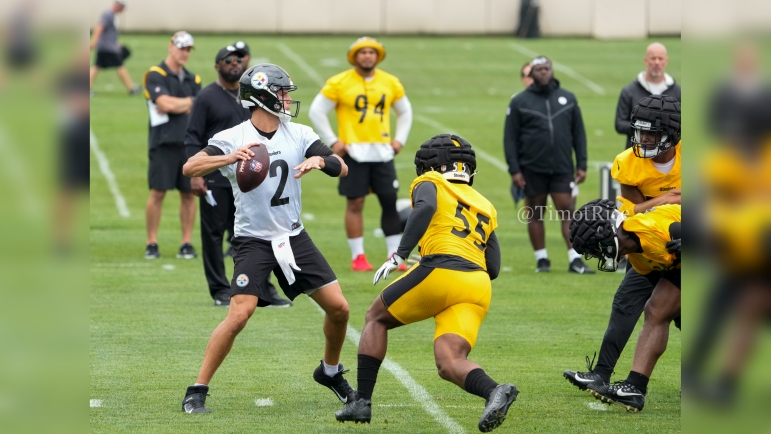 It’s no secret that the 2021 season, his first back on the field since a torn ACL suffered early in the 2020 season, was a disastrous one for Pittsburgh Steelers linebacker Devin Bush. In his return from the torn ACL, Bush looked rather passive and overly hesitant playing in the box for the Steelers, struggling against the run and lacking confidence overall in space in pass coverage, leading to him being benched for stretches, and being rotated out of the game in certain packages in others.

Now, more than a full year removed from the injury and able to go through a complete offseason without any rehabilitation needed, Bush is having a ton of fun, flying around and playing with confidence so far in training camp, according to Steelers’ defensive lineman Chris Wormley, who appeared on 93.7 The Fan Tuesday prior to practice with hosts Joe Starkey and Josh Rowntree.

Devin Bush comes away with an INT on a pass Zach Gentry couldn't haul in. #Steelers

That’s good news on Bush from Wormley, especially considering Bush’s fifth-year option was declined by the Steelers this offseason, making the 2022 season a contract year for the former No. 10 overall pick in the 2019 draft out of Michigan. With that decision, coupled with his very poor play last season, Bush is out to prove something to the Steelers, the fanbase, and the rest of the NFL, according to Wormley.

“I mean, anytime you come off of a major injury…I’ve coming off an ACL before and it took me more than a year to get back into the form that I knew that I could play at,” Wormley said to Starkey and Rowntree Tuesday, according to audio via 93.7 The Fan. “But he’s flying around, having a lot of fun, having a lot more confidence. Not only in his ability to make plays, but calling plays out is something that we’ve seen that I think is gonna help us out a lot this year.

“Devin’s looking to prove something, I think,” Wormley added, according to audio via 93.7 The Fan. “And I think he’s poised to do that almost two years now removed from an ACL, and he’s ready to show not only the Steelers, but the whole NFL, what he can do.”

Last summer at then-Heinz Field for training camp, Bush returned and didn’t need to go on Active-PUP or anything like that after missing most of the 2020 season with the knee injury. It was great to see him back on the field so quickly, but once the actual games started, he just wasn’t right, right from the get-go.

That led to poor play, a lack of aggressiveness, and an overall hesitance in traffic, which saw him struggle greatly as a run defender. His very poor play last season made the Steelers’ decision to decline the fifth-year option a relatively easy one. Now though, fully healthy and having the chance to play behind a rebuilt defensive line and work with standout defensive coach Brian Flores, Bush has the chance to bounce back in a major way and get back to his level of play he showed as a rookie.

Myles Jack and Devin Bush working together on far field during ST sessions. Hitting the blocking sled. Brian Flores coaching them. Like to see the extra work. #Steelers

If he can bounce back in a major way, he’ll provide a significant boost to a defense aiming to be the best defensive team in the NFL. With Bush returning to a high level of play in 2022, that will go a long way overall.