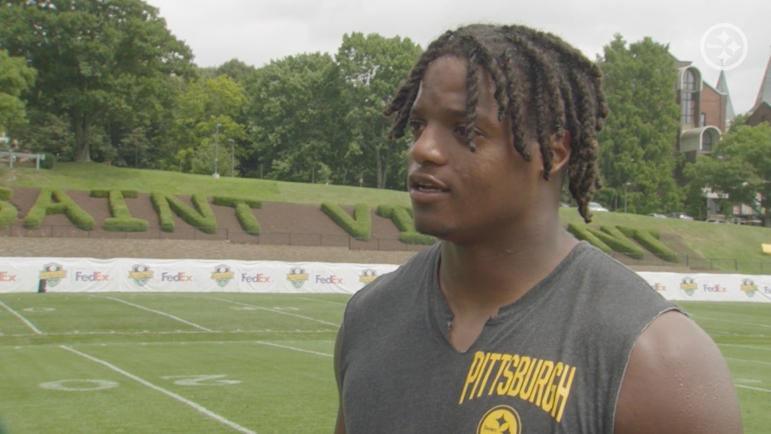 The Pittsburgh Steelers’ depth at outside linebacker is not exactly what anybody would characterize as awe-inspiring, even if they have the best in the entire league at the top of the group in T.J. Watt. While Alex Highsmith is already no slouch across from him, the team lacks anybody being the starters to work up much of a sweat over.

Still, they have a bunch of younger guys running around in training camp trying to earn those spots and show that they are somebody who shouldn’t go unnoticed. One such candidate is Delontae Scott, a member of the team’s practice squad last year, who has quietly had a pretty good camp, and has enjoyed his time in Pittsburgh.

“Playing here is a huge blessing, especially for a guy who does play linebacker”, he recently told the team’s website. “You feel it. Coach says the standard is the standard. You got guys, like, my teammate is T.J. So, that’s the standard, and we’ve all got to work to make sure we match his intensity in the way he plays, and that’s how the whole group is”.

A 2020 college free agent out of SMU, Scott originally signed with the Green Bay Packers as a rookie that year, and spent the entire season on the practice squad, until mid-December, when he was moved to the Practice Squad/Injured List.

The Packers liked him enough to retain him on a Reserve/Future contract at the end of the season, and he made it all the way through the end of August last season. The Steelers picked him up and signed him to their practice squad the first week of September, where he remained all year, barring a one-game call-up as an elevation.

He made his debut in Week 11 against the Los Angeles Chargers, logging seven snaps on defense and two on special teams, thus far accounting for the entirety of his NFL playing career beyond the preseason.

That was his only time wearing a Steelers uniform in-game, since he was with the Packers during the preseason last year, so later this week will be his first extensive opportunity to don the black and gold inside of a stadium.

And he’ll be kicking off a backup competition at the outside linebacker position that also includes Derrek Tuszka and Genard Avery at the top, along with Tuzar Skipper, and the recently signed Ron’Dell Carter. Gone are two rookie college free agents due to injury, Tyree Johnson and T.D. Moultry.